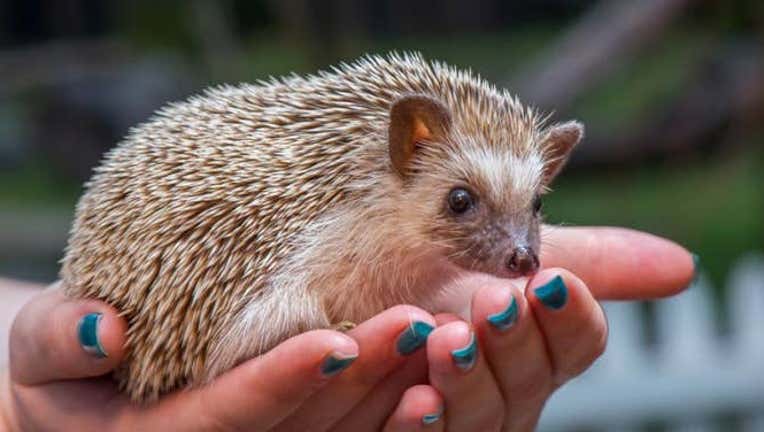 The zoo's hedgehogs have fared better at predicting the weather than Punxsutawney Phil.

Every February 2, America turns its sights on a small town in central Pennsylvania to find out whether a small, four-legged creature sees his shadow.

Folklore has it, if Punxsutawney Phil does see his shadow, the country is in store for six more weeks of winter weather.

This groundhog tradition is thought to have originated in the 1800s and, over the decades, has become a staple in America’s culture.

But since its inception, so-called animal forecasters have popped up around the country, all with the same goal of answering the age-old question: When will winter end?

The Oregon Zoo says they are the ones to watch for whether there will be an early spring or a prolonged winter.

While FuFu the hedgehog has only been making predictions for a few years, folklore has it that the tradition of turning to these prickly prognosticators for weather analysis dates back centuries to old Europe.

The Europeans maybe have stumbled onto the animal world’s most accurate prognosticator.

The zoo’s hedgehogs have fared slightly better than Punxsutawney Phil, with about a 53 percent accuracy rate.

Residents in Southwest Florida say they’ll pay homage to a bird that’s commonly found in the Sunshine State and other warm areas of Central and South America.

Biologists say the burrowing owl is one of the smallest owls in the state, but its forecasts are always mighty.

But keep in mind, a late winter day in South Florida typically sees lows in the upper 50s and highs in the upper 70s, which isn’t too shabby compared to other areas around the country.

"It’s our way of localizing the classic Groundhog Day event and making it our own," said Cape Coral Friends of Wildlife Vice President Pascha Donaldson. "The event is also an opportunity to spread awareness and provide education on burrowing owls."

For eight years in a row, people in the town of Brevard, North Carolina, have turned to a white squirrel for their weather prognostication.

The center of attraction used to be Pisgah Pete but because of his recent retirement, Penelope Ella Catherine Elizabeth, aka Pisgah Penny, will be surrounded by the fanfare.

In addition to the weather forecast, this busy little squirrel will also take a stab at who will come out victorious in the upcoming Super Bowl.

Since the start of this annual event, the White Squirrel Institute said they have seen a significant increase in white squirrel adoptions, which goes a long way in helping the wildlife center.

Since 2019, some New Yorkers have sought the help from a chicken in determining when they’ll say goodbye to Old Man Winter.

The Muscoot Farm in the town of Katonah is home to several chickens, including the acclaimed Clucksatawney Henrietta.

This annual event is unique because winter prognostication isn’t dependent on whether Henrietta sees her shadow or not but rather when the bird lays her egg.

Farmers say if the chicken lays an egg during the annual Groundhog Day ceremony, there will be an early spring; otherwise, New Yorkers will be dealing with six more weeks of winter.

There is no word on if the egg-laying style of forecasting is more accurate than seeing one’s shadowy figure, but anything will do when you are tired of seeing the snowdrifts burying literally everything in sight.

Handlers of the state’s most infamous duck believe they have the most accurate weather-predicting groundhog alternative on the planet.

Every year in Eastford, a small gathering of residents brave the cold morning temperatures for Scramble the Duck’s yearly prediction.

If Scramble sees his shadow, it means the area is in store for six more weeks of winter.

Organizers say their predictions have been 100 percent accurate due to in part, that ducks are more intelligent animals than the groundhogs and have more exposure to year’s weather extremes.

The Lone Star State has a unique way residents will try to gain insights on whether spring will come early.

Outside of Austin, Bob the armadillo is the animal everyone looks to for his yearly prediction.

Each year the animal is driven from Katy to Bee Cave for a crowd to part in the annual event.

Organizers say the animal may not always get the forecast right, but the little guy is tough, having to endure Texas' frigid winters and summer heat.

An animal that’s very similar to the groundhog that Oregonians look to to decide the fate of Old Man Winter is the beaver.

For years, Stumptown Fil, otherwise known as Filbert the beaver, has been making predictions from his home at Oregon Zoo.

Animal experts say what makes the beaver different from a groundhog is its tail and teeth. The adaptations make the animal primed for its watery habitat versus a groundhog, who prefers a good patch of dry land.

As it pertains to the accuracy of his predictions, zookeepers admit you may want to stick to a certified weatherman.

In 2020, Filbert predicted an early spring, but about a month after the prediction, the zoo had to temporarily close because of ice and snow.