Critics say rather than killing the bison, the animals should be relocated to other areas or given to Native American tribes under an existing effort.

FLAGSTAFF, Ariz. (AP) - A bison herd that lives almost exclusively in the northern reaches of Grand Canyon National Park won't be targeted for lethal removal there this fall.

The park used skilled volunteers selected through a highly competitive and controversial lottery last year to kill bison, part of a toolset to downsize the herd that's been trampling meadows and archaeological sites on the canyon's North Rim.

Introducing the sound of gunfire and having people close to the bison was meant to nudge the massive animals back to the adjacent forest where they legally could be hunted. But the efforts had little effect.

"They just kind of moved a bit from where the activity occurred, and sometimes they'd come back the next day," said Grand Canyon wildfire program manager Greg Holm.

New surveys also have shown the herd is closer to the goal of about 200, down from an estimated 500 to 800 animals when the park approved a plan to quickly cut the size of the herd. The park is now working with other agencies and groups on a long-term plan for managing the bison, an animal declared America's national mammal in 2016 and depicted on the National Park Service logo.

Hunting over hundreds of years and a genetic bottleneck nearly left the animals that once numbered in the tens of millions extinct in the U.S. Federal wildlife authorities now support about 11,000 bison in about a dozen states, including the largest herd on public land at Yellowstone National Park.

Yellowstone, which spans 3,500 square miles in Wyoming, Montana and Idaho, also is developing a new management plan for the roughly 5,500 bison there. It's working with Native American tribes, state agencies and other groups to find ways to reduce the number of bison sent to slaughter.

Theodore Roosevelt National Park in North Dakota regularly rounds up bison using helicopters and corrals, then transfers some of the animals to tribes, other states and national parks. Without natural predators, bison herds can grow quickly and strain the resources, the park says.

The Grand Canyon herd didn't always live within the park's boundaries, where they can be seen along the highway leading to the North Rim entrance. The bison are descendants of those brought to Arizona in the 1900s as part of a crossbreeding experiment with cattle. 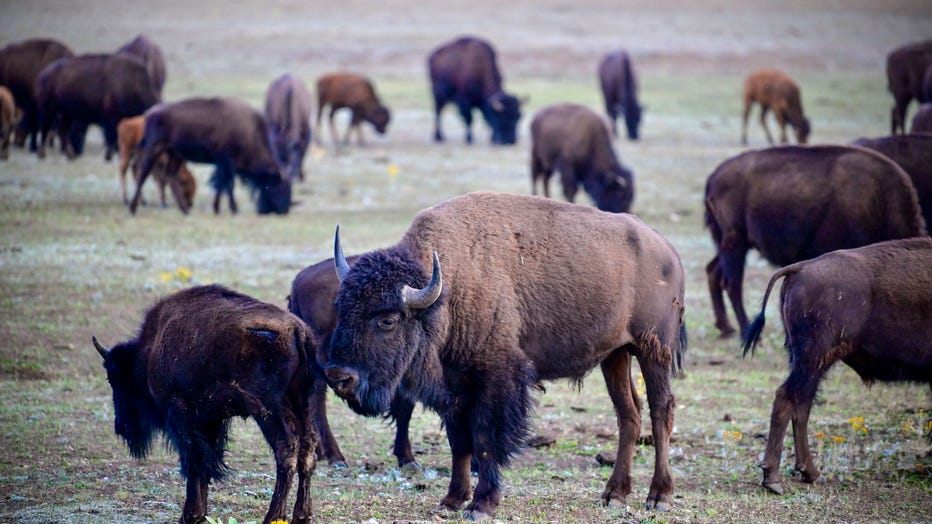 The animals increasingly recognized they could be hunted on the adjacent national forest and sought refuge in the national park. Hunting isn't allowed at national parks, but the agency has authority to kill animals that harm resources, using park staff or volunteers.

Most of the bison at Grand Canyon have been removed by corralling them and transferring them to Native American tribes that have been trying to reestablish herds on their land. A controversial pilot project last fall sought skilled volunteers to shoot up to 12 of the animals.

More than 45,000 people applied for the chance. Ultimately, 10 were picked, and they were able to kill four bison. Although the animals are massive, they're quick and agile and can hide among thick stands of trees.

Grand Canyon officials say they won't repeat the program this fall, but it won't be excluded as a tool in the future. Another corralling effort is planned.

The latest bison population estimate based on aerial surveys and tracking devices shows 216 bison on the expansive Kaibab Plateau, according to Grand Canyon National Park. Agencies that manage the land and wildlife in far northern Arizona and study the bison's movement are meeting in July to start talking about the long-term plan.

Part of that discussion will include creating more gaps in the state-sanctioned bison hunting seasons outside Grand Canyon National Park to see if bison will move outside the boundaries, said Larry Phoenix, an Arizona Game and Fish Department regional supervisor.

Meanwhile, the Game and Fish Department is seeking approval to improve fencing, cattle guards and water catchments to expand the range for another herd of bison in far northern Arizona. The state imported 15 bison yearlings from a privately owned nature reserve in Montana in late 2017 and said the herd now needs more room to grow.

Phoenix is confident these bison won't follow the others into the Grand Canyon, largely because the animals don't know the other herd exists.

Environmental groups are skeptical fences can keep them from straying and adding to the overall bison population in the region where they've been difficult and costly to keep in check.

They're asking the U.S. Forest Service to do an in-depth review of the proposal that considers climate change and impacts to plants and animals like the chisel-tooth kangaroo rat.