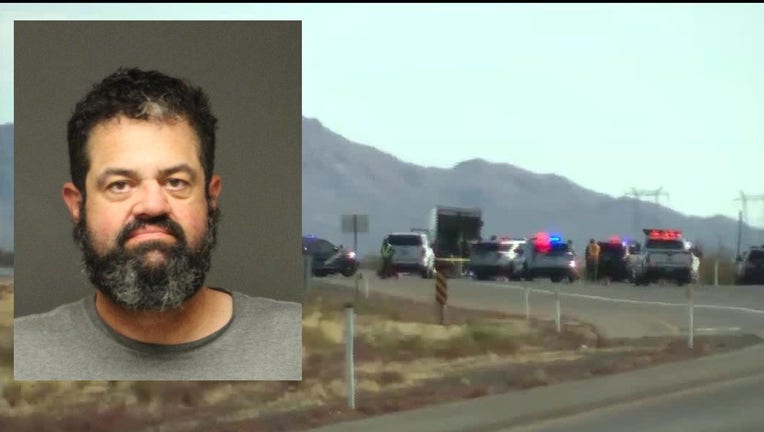 LAS VEGAS - Troopers investigating a crash last year that killed five bicyclists on a stretch of Nevada highway did not suspect the driver of the box truck that hit them was impaired, although a blood test later found he had a potentially lethal level of methamphetamine in his system, a Las Vegas television station reported.

KLAS-TV said it reviewed hours of trooper body-camera video, photos, internal documents and court records about the wreck that resulted in an agreement that let driver Jordan Alexander Barson plead guilty to two counts of driving under the influence causing death. He originally faced 14 felonies.

The lead prosecutor said the evidence against Barson was weakened because Nevada Highway Patrol troopers at the scene didn’t find probable cause to require a blood sample for testing. Instead, Barson submitted to a voluntary blood draw two hours after the crash.

"They didn’t get a search warrant in the case, and that had to do with they didn’t suspect DUI," former Deputy Clark County District Attorney Thomas Moskal told the station. Moskal has since left the district attorney’s office.

"Ultimately, that had negative consequences down the road," he said.

About 20 bicyclists were riding into a strong headwind during an annual recreational ride through scenic desert in Nevada and California.

Barson was working for an Arizona-based courier service. He had driven from Arizona to Las Vegas for a pickup and was on his way back to Arizona.

He told investigators he fell asleep at the wheel and had no memory of striking the bicyclists and an escort vehicle in the right southbound lane of the four-lane divided highway.

"I don’t have reason to believe he’s under the influence, but he’s obviously distraught," a trooper said in one of 16 body camera videos obtained by KLAS-TV through a public records request.

"He thinks he fell asleep. I tend to really believe that," another trooper said.

As troopers worked to identify the dead, they put Barson through a field sobriety test and tried to convince him to submit to a voluntary blood draw.

During the test, Barson "raised his arms, performed an improper turn" and "used his arms to balance," a trooper wrote. The trooper later filed a report deeming the results "unsatisfactory." He said Barson was "shaking uncontrollably" and was an "emotional wreck given the severity of the incident."

A toxicologist later wrote that the amount of meth in Barson’s blood is often seen in overdose patients.

A 2013 U.S. Supreme Court ruling requires police to get a warrant before obtaining a blood draw from a driver suspected of being under the influence of drugs or alcohol.

Nevada law requires law enforcement to establish probable cause to take a driver’s blood. If Barson didn’t agree to a voluntary draw, troopers would have to call a judge for a telephonic warrant, a common practice.

Troopers asked Barson five times to submit to the voluntary blood draw, KLAS-TV reported. They told him he would have his license suspended, which is standard procedure, if they called a judge for a warrant. They also told him he may no longer be able to work if he couldn’t drive.

Moskal said the question of whether Barson gave "free and voluntary" consent meant the evidence about methamphetamine would never make it to a jury.

Lacking probable cause, troopers released Barson. He returned home to Kingman, Arizona, where he admitted during an interview four days later that he consumed meth around 4 p.m. the day before the crash.

Barson told troopers he did not sleep well but set out the following morning on his regular work route between Las Vegas, the Colorado River town of Bullhead City, Arizona, and Kingman.

Two weeks after Barson’s blood results came back, a Nevada Highway Patrol drug recognition expert filed a report based on what she saw in the trooper videos.

She said it was clear to her Barson was under the influence of a stimulant. However, no trooper with current training as a drug recognition expert responded to the scene.

Tom Trauger's widow, Donna, pointed to the two counts of DUI resulting in death that Barson pleaded guilty to. One named three bicyclists as victims. One named two.

Tom Trauger had joined the planned 130-mile (209-kilometer) bicycle trek to celebrate. One rider was retiring, and another had a birthday.

"His pure joy was just being out there on a beautiful day riding his bike," Donna Trauger said.

KLAS-TV said Gov. Steve Sisolak, a Democrat, declined an on-camera interview about the case and issued a statement through a spokeswoman expressing condolences to the victims' loved ones for what he called a horrendous loss of life. The statement said Sisolak remains committed to working with state and local partners to make Nevada’s roads safer.

In a statement, the department called safety and lives a priority "for every trooper who has taken an oath to keep our roadways and our communities safe."

"The Department has reviewed this investigation thoroughly and continues to be committed to improving investigative techniques, providing necessary resources and ongoing training for troopers," the statement said.

The Highway Patrol did not explain what, if anything, has changed since the crash.