A Maryland man traded in his garbage collecting job for a Harvard Law School acceptance letter and he has his friends and family to thank.

Rehan Stanton of Bowie, Maryland, who formerly worked as a garbage collector, never thought he’d see the day when he would get accepted into five universities, let alone three Ivy League universities.

But now, Stanton, 24, can proudly say he will be pursuing a law degree at Harvard Law School, and he has his family and friends to thank. 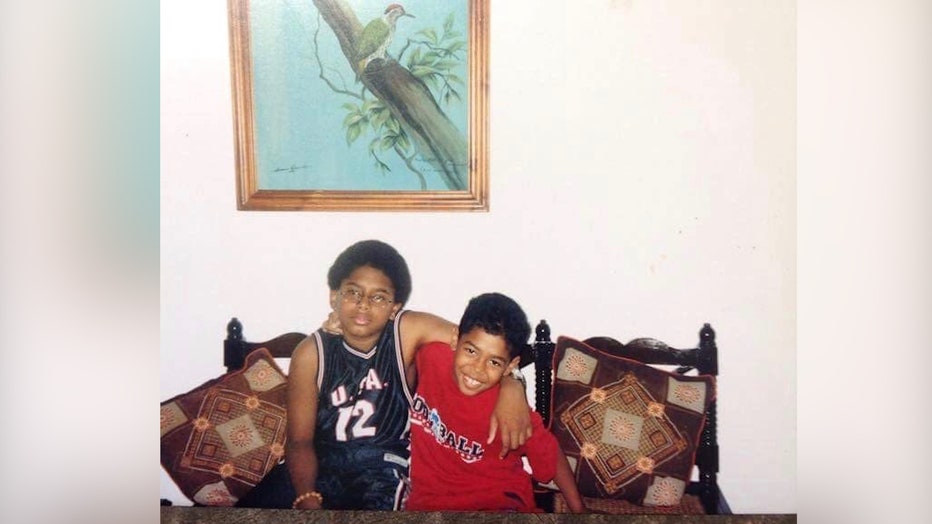 Rehan and his brother Reggie together when they were younger.

That’s when Stanton said his life went from relative comfort to poverty and struggle.“My dad got laid off not long after she left,” Stanton continued. “My dad had to work between two and three jobs to make ends meet and even then, sometimes we didn’t have food in the fridge. No electricity, HVAC was broken and it got really cold during the winter. At night I had to wear a coat.” 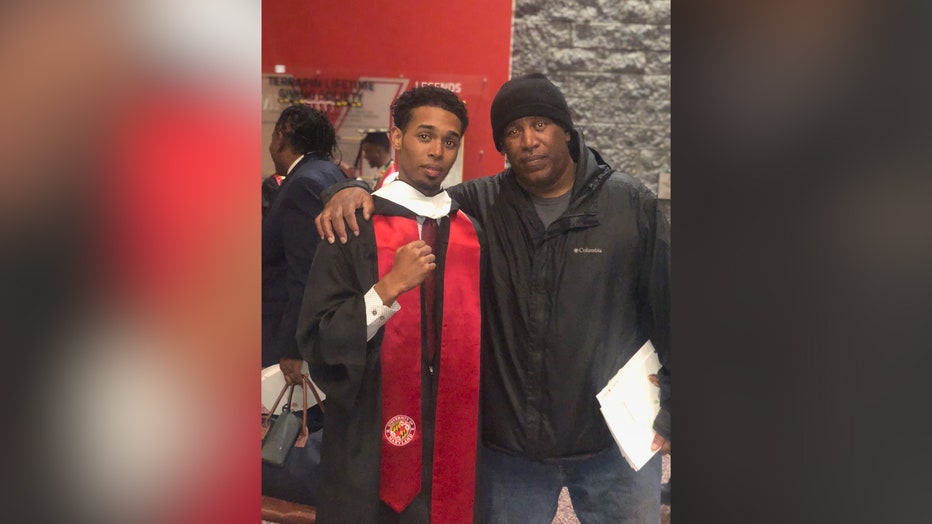 Rehan and his father, Reginald Stanton.

He recalled having a tumultuous relationship with school, especially in middle school. Stanton remembers receiving a poor grade in one of his classes, which resulted in his teacher putting him in remedial classes.

“That made me upset,” Stanton said. But despite having to work multiple jobs and having little to no energy, his father somehow manged to find someone to tutor him for free.

Stanton saw better results in school and he even managed to get on the honor roll. The experience was one of the earlier instances in which Stanton said his family helped him succeed in his schooling.

Stanton admits he was a bit of a troublemaker in high school, and again, his grades began slip. His one solace was training with his brother during the summers to eventually get a boxing scholarship at a university. But those dreams were dashed when he got a stomach ailment that rendered him immobile and unable to keep any food down. His training came to a halt and he left high school with a poor grade point average.

Stanton and his brother, Reggie, were determined to continue his martial arts and boxing training as soon as he became well.

Both he and his brother got back into the groove of training and even snagged a well-respected trainer that had worked with two Olympic gold medalists. 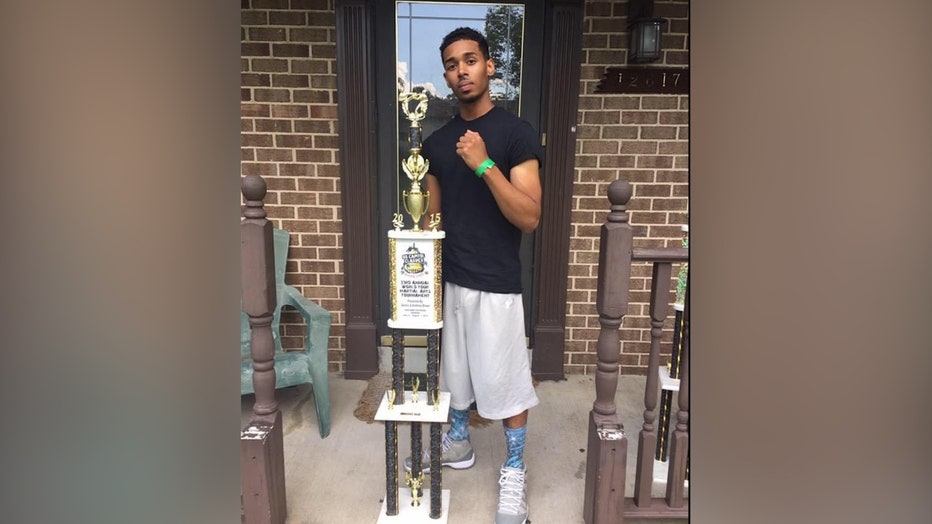 Rehan and his fighting trophy.

“However, life once again did not cut me a break. After I injured both of my shoulders, I had to stop fighting,” Stanton said.

To add insult to injury, Stanton was rejected from all of the colleges and universities he had applied to.

“Nothing worked this time,” he said. “I was not motivated to do much of anything besides keeping my job to help dad.”

Stanton’s father had been working as a delivery driver for several different companies, so he decided to help his dad pay the bills. That is what led Stanton to apply for a job in sanitation.

Alongside his brother, Stanton got a job as a garbage man. 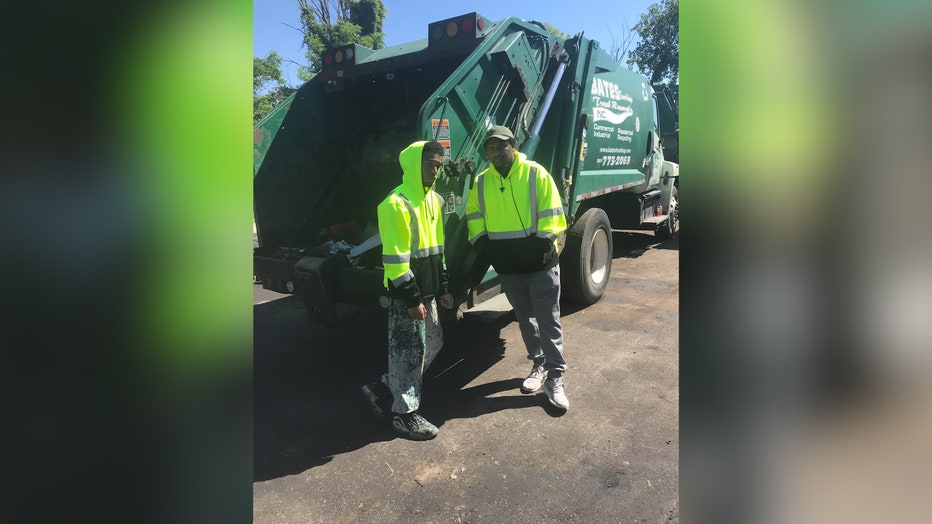 Rehan and his brother Reggie at work.

“You knew that dad needed help with the finances to keep our home, and you knew if I kept working, I would never go to college,” Stanton wrote in a letter to his brother.

His sanitation colleagues decided they wanted to help get him back on track and spoke to Brent Bates, the son of the owners of the garbage trucking company. They talked Stanton up to Bates, who decided he would help get him into school. That’s when Bates introduced him to a professor at Bowie State University.

“When he (Reggie) found out that I met a connection that could get me into Bowie State, he dropped out of school during his sophomore year to give me a chance to succeed and he would go help my dad,” he said.

Stanton recalled the moment his brother walked into his room and dropped this bombshell news on him.

“He just walked into my room and said he dropped out and it made me nervous,” Stanton said. “It was a lot of pressure. I just remember feeling really nervous. Dad was angry.”

While Stanton was nervous about Reggie’s decision, he will always remember what his brother said to him.

“He said, ‘Literally everything you do, you become the best at it, you were born different. I can’t do what you do. If you go, you’re going to make things happen,’” Stanton said.

His brother made the sacrifice so he could have the chance to excel in school, and excel he did.

Stanton was able to apply to Bowie State University, where he completed two years and transferred to the University of Maryland College Park.

During his time at the university, however, Stanton and his brother were hit with another blow: Their father had suffered a stroke.

While it was a difficult time for his family, Stanton said he was determined to keep going.

“After dad suffered his stroke working three jobs to help me through school, I promised you that I would excel,” Stanton continued in his open letter to his brother. “That’s why the happiest moment of my life was standing at the podium as Maryland’s Commencement Speaker. I felt like I was finally able to pay my homage to both of you for your sacrifices.”

Stanton graduated with a 3.8 grade point average and left with a B.A. in history.

It seemed things were finally looking up. Stanton recalled having several job offers lined up for him and a book deal with a New York Times bestselling author.

But life had different plans for him, and he was hit with another ailment.

“I literally lost everything after I got extremely sick in May of 2019 and remained sick the rest of the year,” he recalled.

“I hate thinking about the time I cried to you telling you about how I always drop the ball,” Stanton said in the letter to his brother. “How I always find a way to fail, how I am cursed, and how something always comes completely out of the blue and knocks me off track.”

He felt guilty that his father worked through his stroke and continued to earn money to send him to school, “It was now in vain,” Stanton said.

“Everything I did at school, I did it for us (family),” he continued. Stanton said he felt that he had put his family in an even worse position.According to Stanton, the family’s mortgage had to be pushed back in order to take care of his health problems.

“We almost lost everything, again, and it would have been all my fault,” he recalled.

One night, Stanton said he remembered his cousin told him to watch a video of Steve Harvey’s “Apollo Story” to motivate him, and it did just the trick.

“It gave me the hope to keep pushing despite our bleak situation,” he said. That’s when he decided to call up his brother to tell him, he wanted to go to law school.

The next weekend, Reggie bought and dropped off the needed LSAT study materials and told Stanton, “Put in that work, don’t waste my money.”

That’s when the grueling studying began. “I was nauseated 24 hours a day and I had to kept listening to Gary Vaynerchuk’s motivational videos to keep me going,” Stanton said.

He took the LSATs and passed with flying colors.

He got accepted into almost all of them.

He will begin classes online at Harvard Law School this fall.“Despite all these difficulties that we’ve been going through over the decades, I finally got into Harvard,” Stanton said. “All of their sacrifices were not in vain. I don’t even know how to put into words. I don’t think even they can put it into words.”

Both Reggie and their father are immensely proud of him, “They were truly overjoyed,” Stanton said.

He reiterated how he would not have been able to do this without the help of his family, his fellow co-workers and mentors, “I wouldn’t have made it here without them.” 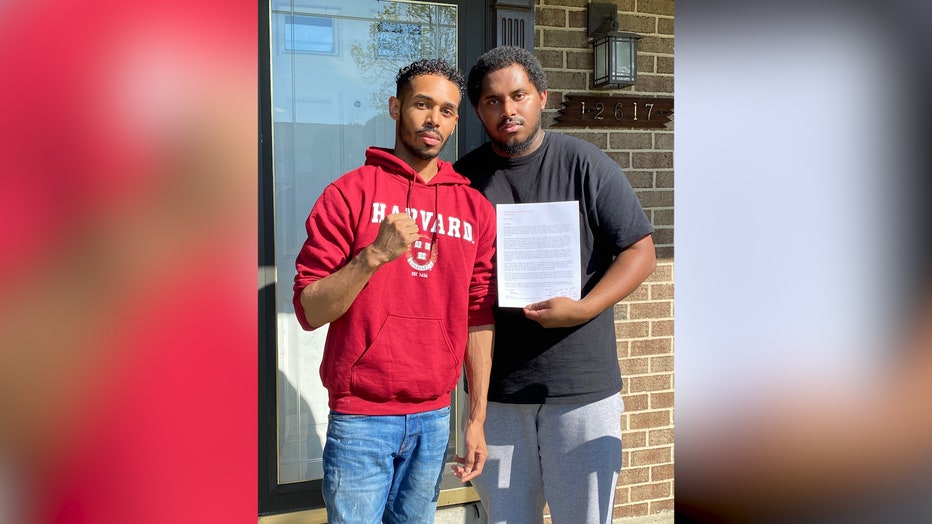 Rehan and his brother Reggie with his acceptance letter to Harvard Law School.

Stanton’s favorite motivational quote came from Muhammad Ali:“I hated every minute of training, but I said, 'Don't quit. Suffer now and live the rest of your life as a champion.'”

Stanton has a GoFundMe page set up to help with tuition costs as well as his father’s medical bills.