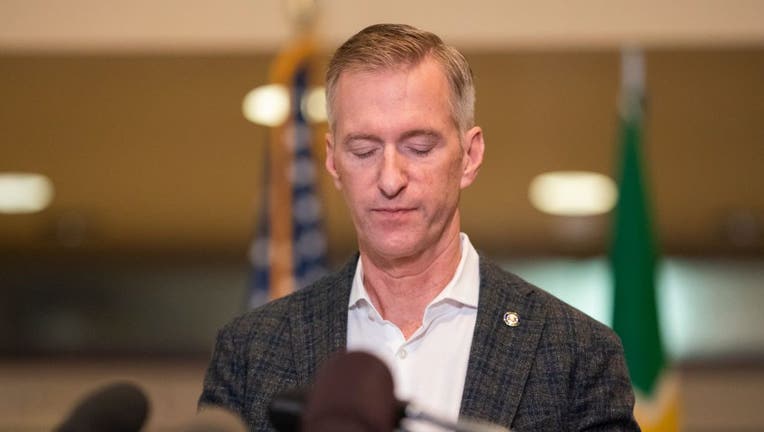 PORTLAND, Ore. (AP) - Black Lives Matter protesters in Portland, Oregon, shifted their focus to the city's mayor, and police declared a riot as people broke windows, vandalized a business and set a fire inside the upscale apartment building where Mayor Ted Wheeler lives.

The demonstration that began late Monday and extended into Tuesday fell on Wheeler's 58th birthday and featured shiny golden alphabet balloons that spelled out an expletive. Protesters sang on the street outside the mayor's building, some wearing party hats.

Wheeler, who is also police commissioner, has come under fire for his failure to bring the violence in Oregon's largest city under control and for heading up a police force that has used tear gas multiple times against demonstrators.

Some also blame the mayor for engaging in a war of words with President Donald Trump instead of focusing on local needs. Trump has put Portland and other Democrat-led cities in the crosshairs of a “law and order” re-election campaign — a move that's escalated tensions in the city and drawn the attention of right-wing Trump supporters.

A supporter of the right-wing group Patriot Prayer was killed Saturday during clashes with protesters. A caravan of Trump supporters, estimated at about 600 cars, encountered Black Lives Matter protesters as they drove through the downtown and skirmishes broke out.

Police have not announced an arrest in the slaying of Aaron J. Danielson, 39, of Portland, and have said nothing about what led up the shooting.

Protesters were angry Sunday when Wheeler held a news conference about the shooting and traded barbs with Trump, who was watching the conference live on TV and tweeted insults at Wheeler. Many said afterward that they wanted to hear about solutions to the violence and how to keep the city's Black residents safe. They complained that the mayor instead engaged in “political theater" with the president to raise his own profile.

Wheeler, the son of a wealthy timber scion, is seeking a second term against Sarah Iannarone, a candidate to the left of him who has marched repeatedly with protesters. Wheeler said at the conference that he does not believe in completely defunding the police, would not resign and would not turn over the Portland Police Bureau to Jo Ann Hardesty, the city's first Black councilwoman.

“He used that press conference to try to score political points with a president we already know is a problem. He was asked point-blank what could have been done to prevent this, what could we do better in the future, and he did not have concrete strategies,” said Cameron Whitten, founder of the Black Resilience Fund and a longtime activist in the city. “It truly was appalling."

The situation grew more uncertain Monday, when two suburban counties refused to send deputies to help the Portland police. The Oregon State Police and sheriff's deputies from Multnomah County — the county that includes Portland — are bolstering the city's force.

RELATED: Portland's mayor tear-gassed by US agents as protest rages

But sheriffs in Clackamas and Washington counties said they would not send deputies to Portland.

“The same offenders are arrested night after night, only to be released by the court and not charged with a crime by the DA’s office. The next night they are back at it, endangering the lives of law enforcement and the community all over again,” Roberts said.

Brown has so far declined to send the National Guard to Portland, as Trump has suggested.