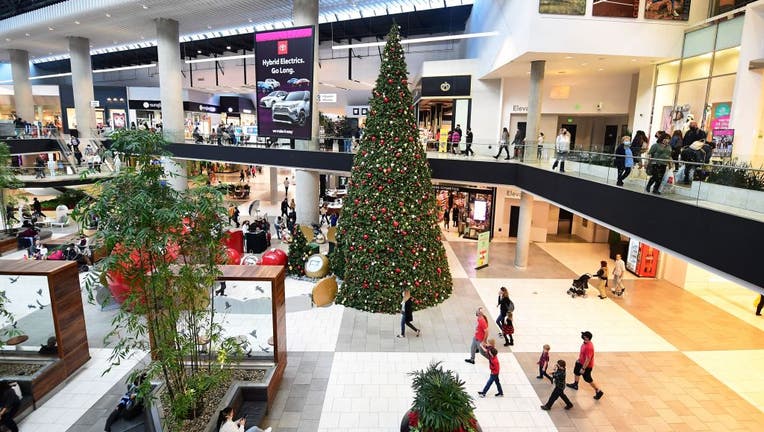 People walk at a shopping mall in Santa Anita, California on Dec. 20, 2021. (Photo by FREDERIC J. BROWN/AFP via Getty Images)

Americans, beset by lack of product choices, rising prices and the arrival of omicron, sharply cut their spending in December after a burst of early buying in the fall boosted this year's holiday shopping season.

Retail sales fell a seasonally adjusted 1.9% in December from November when sales increased 0.3%, the U.S. Commerce Department said Friday. Sales rose 1.8% in October as shoppers, worried about product shortages, got a head start on their holiday buying. Still, retail sales surged 16.9% last month compared with December 2020, the Commerce Department said Friday. For all of 2021, sales spiked 19.3% compared with the previous year.

Omicron was identified by the World Health Organization in late November, and the December report from the Commerce Department is the first to capture some of its effect on consumer behavior.

The monthly retail report covers only about a third of overall consumer spending and doesn’t include money spent on things like haircuts, hotel stays or plane tickets, all which tend to see business tail off when anxiety about COVID-19 tick higher. In November, restaurant sales posted a 1% gain — the sector’s best performance since July.

Industry analysts suspect that shoppers who waited until the last minute and didn’t find what they wanted and took a pass or they bought gift cards, would not show up in retail data until those cards are redeemed.

The National Retail Federation is crunching last month's sales figures and will release its report Friday for November and December. The nation’s largest retail trade group has projected record-busting growth of anywhere between 8.5% and 10.5%, compared with the same two months last year.

Mastercard SpendingPulse, which tracks all kinds of payments including cash and debit cards, reported late last month that holiday sales surged 8.5% from Nov. 1 through Dec. 24 from a year earlier. That was the fastest pace in 17 years.

"Consumer spending will remain the cornerstone of economic growth this year, but the near-term path will be choppy amid surging Omicron cases," said Lydia Boussour, lead U.S. Economist at Oxford Economics. Boussour believes that after a soft patch in the first quarter, spending should rebound in the spring due to strong wage growth and savings.

The omicron variant has led to widespread worker shortages with so people calling out sick, including the retail sector, and supply shortages have curtailed what makes it to store shelves. Stores and restaurants have slashed operating hours or remained closed on days they had previously been open.

This week, Lululemon warned that fourth-quarter sales and profits will likely come in at the low end of its expectations as it grapples with the variant’s fallout.

"We started the holiday season in a strong position but have since experienced several consequences of the omicron variant, including increased capacity constraints, more limited staff availability, and reduced operating hours in certain locations," said CEO Calvin McDonald.

And inflation has settled in across almost every level of the economy, forcing the Federal Reserve to stop describing the rising prices as "transitory."

Inflation jumped at its fastest pace in nearly 40 years last month, a 7% spike from a year earlier that is increasing household expenses and biting into wage gains. And the largest price spikes are hitting where Americans can feel it, with the cost of homes, cars, clothes and food racing higher.

Raquel Schuttler, 53, who works in fashion sales, says that the surging costs for food has had a psychological impact on her spending everywhere.

The Atlanta resident, who does grocery shopping for her 17-year-old son and her fiancee, used to make intermittent trips to the grocery store in between big shopping trips but those smaller trips are now costing her $280, instead of $220. She has pulled back lunches at the mall with friends to avoid the temptation to shop there.

"I am being much more conservative," she said. "I stopped any kind of going out impulsively."