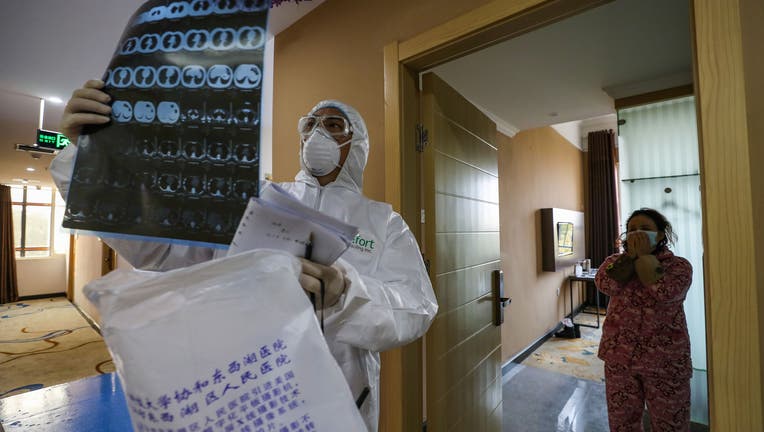 TOPSHOT - This photo taken on February 3, 2020 shows a doctor looking at a lung CT image while making his rounds at a ward of a quarantine zone in Wuhan, the epicentre of the new coronavirus outbreak, in China's central Hubei province. - The number o (STR/AFP via Getty Images)

MADISON, Wis. (AP) - A Wisconsin resident who recently traveled to China has been sickened with a new virus that originated there, becoming the first confirmed case in the state and the 12th in the U.S., health officials said Wednesday.

The adult patient who has a history of traveling to China has been isolated at home but state health officials would not say where, or provide details such as the patient’s age. More information about their location will be coming later from the local health department, said Dr. Ryan Westergaard, chief medical officer in Wisconsin’s Department of Health Services Bureau of Communicable Disease.

Minnesota hospital prepared for any coronavirus cases in the state

Health officials say hospitals in the state are prepared to handle any potential cases of coronavirus as a new case has been confirmed in Wisconsin.

The person had mild symptoms, including fever, cough and shortness of breath, but is “doing well” and recovering at home, Westergaard said.

The person came to the University of Wisconsin Hospital emergency room in Madison to have their symptoms evaluated, said Dr. Nasia Safdar, director of infection control at UW Health. The patient was tested for the coronavirus because they had traveled to Beijing, China, within two weeks, she said. Health officials would not say when the person came to the hospital, but the positive test results from the U.S. Centers for Disease Control and Prevention came back on Wednesday morning.

Health officials said those who came into direct contact with the infected person, including UW emergency room staff who interacted with the patient, are also being evaluated.

“The risk to Wisconsin residents in general is extremely low,” Westergaard said.

The University of Wisconsin-Madison, home to more than 40,000 students, banned student travel to China last week. The hospital where the patient was treated is located on campus.

Symptoms of the virus include fever, cough, and difficulty breathing. They range from having a mild illness, like the common cold, to severe pneumonia requiring hospitalization. Health officials believe it can take up to two weeks for someone who is infected to show symptoms.

The outbreak of the new type of coronavirus has infected more than 24,500 people globally, with all but a couple of hundred of those in China. There have been 490 deaths in China but none in the U.S. Other cases of the pneumonia-like virus include six in California, one in Massachusetts, one in Washington state, one in Arizona and two in Chicago.

The virus is a member of the coronavirus family that’s a close cousin to the SARS and MERS viruses that caused outbreaks in the past.

Governments have rushed to get their citizens out of China, which is orchestrating history’s largest anti-viral campaign by blocking 50 million people from leaving Wuhan, the center of the outbreak, and nearby areas. A growing number of Chinese cities are discouraging people from even leaving their apartments.

Erik Johnson, the emergency department director at United Hospital, says preparations for coronavirus have been ongoing for weeks now. It is top of mind especially with their location in St. Paul.

"Specific to United Hospital, we are the first place anyone would come from the airport so if there was someone with a respiratory illness on an airplane and they land at MSP they would come to United first," explained Johnson.

"We have the advantage of their learning, we’ve been able to adapt," said Johnson. "We ask the questions, we screen. It’s a busy time of year anyway for respiratory illness; we have all the equipment we need."

There’s even a negative airflow room to quarantine patients if needed and they're in touch the Minnesota Department of Health too.

"I think it’s fair to say it’s very likely we could have a case in Minnesota," said Kris Ehresmann, the Minnesota Department of Health's Director for Infectious Disease. "It’s just a case of what kind of widespread transmission will we see in the country or in our state."

The Department of Health says this virus is tough because of the unknown.

"We’re taking this very seriously because anytime you have a virus that has adapted itself and it’s really new to humans we need to take it seriously."

At the same time, members of the science community are working quickly. In fact, the CDC has already developed a testing kit that will be sent to health departments in the U.S. soon so they can test for the virus themselves.

"The good news is the very first step in the process, which is the FDA approving the test has happened," said so we’re anticipating in the next weeks we can test here 46

Health officials also stress that being diagnosed with coronavirus is not a death sentence. Most of those who have died have had underlying health issues or been elderly.