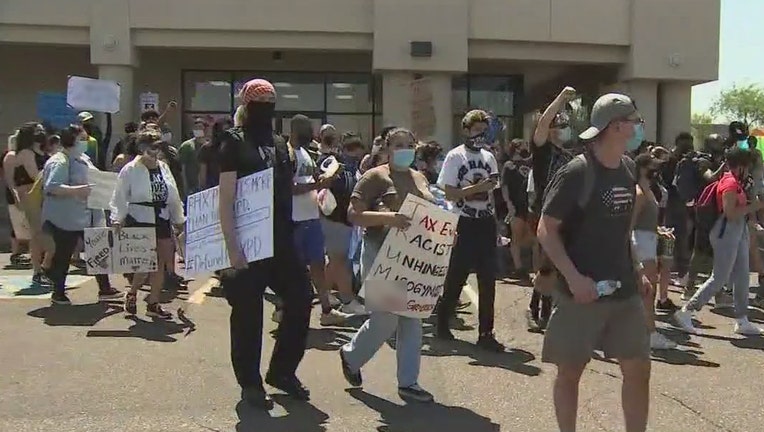 PHOENIX - Phoenix Police officials released additional details surrounding a protest that was later declared an unlawful assembly near a Phoenix megachurch where President Donald Trump made an appearance at an event Tuesday afternoon.

The “Students for Trump” event was held at a megachurch named Dream City Church. Students for Trump is a special project of Turning Point Action, a group chaired by Trump ally Charlie Kirk, which is hosting the president for his address.

According to a statement released by Sgt. Ann Justus by Phoenix Police, at about 4:30 p.m., demonstrators began to move outside an area along Cave Creek Road, in front of the entrance to the church. That area was designated as the "free speech zone." Police officials say the protesters were blocking traffic, and moved into ana rea protected for the presidential motorcade.

Officials say an unlawful assembly was declared after two demonstrators swung at and struck two police officers, and other demonstrators began to throw objects at officers. The decision was reportedly announced over a loudspeaker and on social media.

"Officers utilized flash-bang devices, as well as pepper balls deployed into the ground and a burst of pepper-spray. No gas or projectiles were deployed by officers," wrote Sgt. Justus.

No arrests have been made at this time, according to police officials, and after protesters leave the area, they found a broken window at a nearby business where the people were demonstrating.