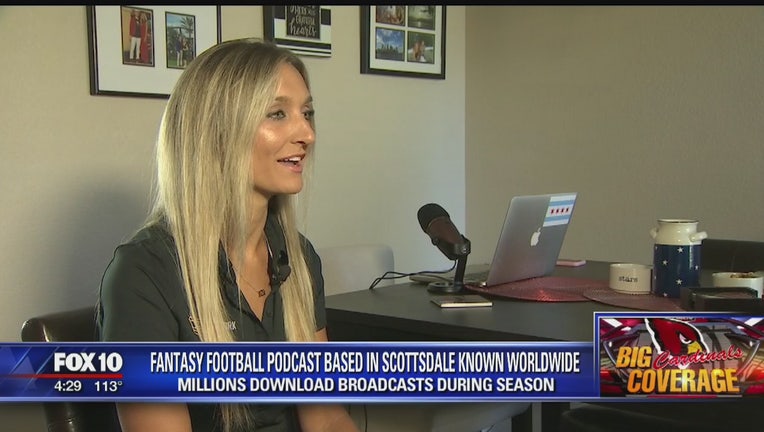 SCOTTSDALE, Ariz. - A Scottsdale woman has become an expert on fantasy football and millions of fans are turning to her for answers. She hosts a very popular fantasy football podcast known worldwide.

Paige Damakos is the COO of the Draft Network and a complete expert in her field. Millions of people listen to her to give them advice about their leagues and how to win. On a night like Thursday night, people are paying very close attention.

Damakos' studio in Scottsdale is where she broadcasts for the Draft Network, a football fantasy analysis podcast. She gives football fans all over the country everything they need to do about their league.

"We have been doing show-by-show quarterback rankings, running back rankings," Damakos said. "They come in [and] use those rankings and take them to their draft and draft their own players."

Damakos' show has garnered a lot of attention. The Draft Network has 2,000,000 downloads at the height of football season, which puts it in the top two percent of podcasts worldwide. Damakos says people are paying more attention to her work because fantasy football has continued to grow in popularity.

Because Damakos is based in Scottsdale, we picked her brain about the Cardinals and how they might do in fantasy football leagues.

"Cardinals fans [have a lot] to be excited about," Damakos said. "When you look at an offense for a fantasy perspective, you love to see a guy like Kliff [Kingsbury] because you know they're going to dial it up and they're going to throw the ball a lot.

And the number one rule Damakos sais about drafting a great fantasy team? Just be patient.

"I probably get 1,000 questions that come in saying, 'Should I draft this guy or this guy?,'" Damakos said. "You want to draft a running back or wide receiver early on and wait on a quarterback."

Another tip? Damakos said wait until the third pre-season game before you make any of your picks because you want all the info you can get before getting locked in.