We're fishing more tuna from the world's oceans than ever before, and scientists say it's unsustainable

VANCOUVER, B.C. - Humans are fishing more tuna from the ocean than ever before, and we’re venturing further than ever into open ocean to do so, but the rate at which industrial tuna fishing is increasing is unsustainable, according to a recent study published in the journal Fisheries Research.

Demand for tuna and similar species is at an all-time high. 2014 was a year of record reported landings of 7.7 million tonnes, which has since leveled off to around 7.5 million per year since.

These catch numbers reflect a 1,000 percent increase in the amount of tuna being caught today as compared to 60 years ago, and many scientists believe that these fishing practices are unsustainable.

To put that in perspective, consider just how much tuna fishing has expanded in the Pacific Ocean alone in recent decades. Pacific Ocean tuna fisheries have consistently dominated the global tuna fishing industry, accounting for about 67 percent of all catches in the past 60 years, but in 2016 alone, Pacific Ocean catches accounted for 74 percent of global catches.

This study is the first to attempt to examine datasets across all ocean basins, and it analyzed 60 years of data around the fishing of large pelagic fish (i.e. those that inhabit the upper layers of the open ocean).

The study used data collected from the five Regional Fisheries Management Organizations (RFMOs) that are responsible for ensuring long-term sustainability of the stocks under their jurisdiction. All of them collect data and assess stock in their management area and set regulations on fishing activity for member countries.

Despite regulations, considerable over-fishing of high-seas fish stocks keeps occurring, and the RFMOs have had difficulty managing stocks and fisheries as well as protecting non-target species impacted by fishing fleets.

In the 1950s, the vast majority of tuna was being fished from the Eastern Pacific from the coastal regions along North and Central America, as well as around the Western Pacific Islands. Barely any of the global tuna catch was coming from the Atlantic and Indian oceans.

By the 1980s, tuna fisheries had expanded operations to be active in equatorial regions across the globe and even further into temperate regions in most ocean areas. 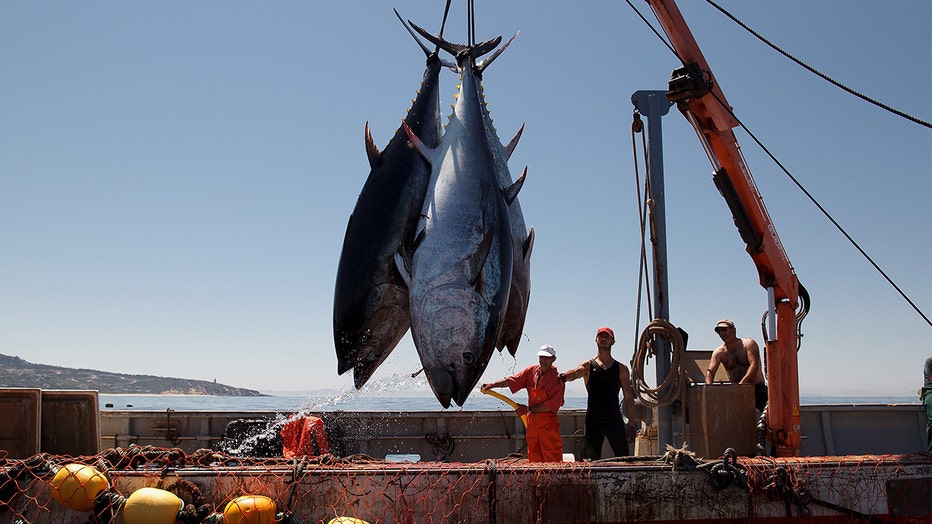 Fishermen lift bluefin tunas from the water during the Almadraba tuna fishing season near the Barbate coast, Spain. A recent study revealed tuna is being over-fished across the globe. (Pablo Blazquez Dominguez/Getty Images)

Yellowfin tuna is the second most over-fished. Catches peaked in 2003 at 1.5 million and then gradually declined to about 1.4 million in 2016 (from 29 percent down to 22 of global catches).

The study also analyzed increases in bycatch, which is the unwanted fish and other marine creatures that are caught along with the targeted species in industrial fishing. Blue shark (Prionace glauca) is often caught along with tuna, and there have been massive increases in catches of blue shark over the last two decades — there were nearly 160,000 caught in 2016.

This can be dangerous for the ocean’s food chain ecosystem, as sharks are apex predators that take longer to reach maturity and don’t produce as much offspring as smaller marine life further down the food chain.

Also troubling is the amount of discard happening. Discard refers to the conscious decisions made by fishers to abandon a portion of their catch for regulatory or economic reasons. Estimated discards went from an estimated 450,000 in 1950 to an estimate 5.6 million in 2016.

So, how did we get here?

Coastal artisanal fisheries for large pelagic fish, such as tuna, have existed for millennia, but the industrialization of fishing began taking off in the early 20th century when Japan began expanding fishing operations in the 1920s by investing in bait boat operations in the Pacific Islands. World War II spurred an incredible demand for canned food, including canned seafood, and the post-war era saw a marked intensifying of industrial fishing across the globe.

As technology for fishing boats improved and freezing capabilities advanced, industrial tuna fisheries were able to rapidly expand. Beginning in the 1980s, industrial tuna fishing operations have been operating across effectively all of the Atlantic, Indian and Pacific oceans.

"Today, industrial fishing fleet effort covers at least 55 percent and possibly up to 90 percent of the global ocean, and fishing in waters beyond national jurisdiction (i.e., the high seas) is becoming increasingly uneconomical without extensive government subsidies and often questionable cost-cutting labor practices," the study’s authors wrote. "The scale of this pattern of expansion is troubling, as we have reached the spatial limit for tuna fisheries, with no new fishing grounds remaining.“

With no new fishing grounds remaining for industrial operations to dip into, the increase in tuna fishing over the past 60 years simply cannot continue on at the same rate.

"The continuation of tuna fisheries and their associated economic benefits at levels similar to the present or recent time periods is dependent on effective and restrictive long-term sustainable management of the fisheries and fleets exploiting these stocks and ecosystems," wrote the study’s authors.

Because a handful of wealthier developed countries, including Spain and the United States, are responsible for the majority of tuna catch worldwide, the study’s authors highlighted the need to protect fisheries in developing countries to ensure a more equitable distribution of benefits from tuna fishing going forward.