Police in Las Vegas said on Monday that they were investigating allegations that a fan in the stands struck the Cardinals quarterback amid celebrations of Arizona’s 29-23 overtime victory over the Raiders.

Murray said on Sept 21 that the crazy ending to the game mirrored the crazy postgame situation with fans. Talking to reporters, the quarterback didn’t condone the smack but also didn’t act as if he wanted to hold a grudge.

"Stuff happens fast," Murray said. "I don’t know. I know every person I’ve hit in the face, I did it for a reason. I don’t know if he probably didn’t know where he was — it was a pretty live game. Vegas is Vegas. I’m sure he was having fun. But — I don’t know — I don’t think any player should be getting touched in that matter.

"But no hard feelings toward the guy. If I see him, I’ll shake his hand. It is what it is."

Murray said he doesn’t regret going toward the stands during the postgame celebration: "No — I would do it all over again if I could."

Murray was high-fiving front-row spectators at Allegiant Stadium following Byron Murphy Jr.’s game-ending fumble return on Sunday when a man appeared to reach out and smack Murray in the face with an open hand.

Video showed Murray appear stunned, but not injured, then attempt to identify the attacker in the mostly happy crowd.

Officer Larry Hadfield, a Las Vegas police spokesman, confirmed that a battery complaint was made at about 6:30 p.m. on Sunday at the stadium. The report was not immediately available.

The victory was Arizona’s first since Murray agreed to a $230.5 million, five-year contract extension. He was the No. 1 overall pick in the 2019 draft after winning the Heisman Trophy at Oklahoma in 2018.

MORE: Murray shows he’s worth $230.5 million to Cards in comeback 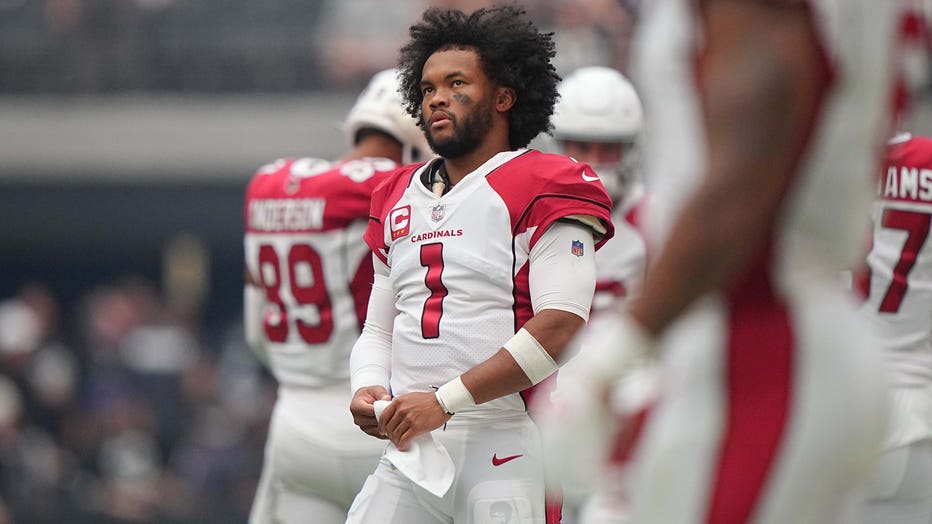