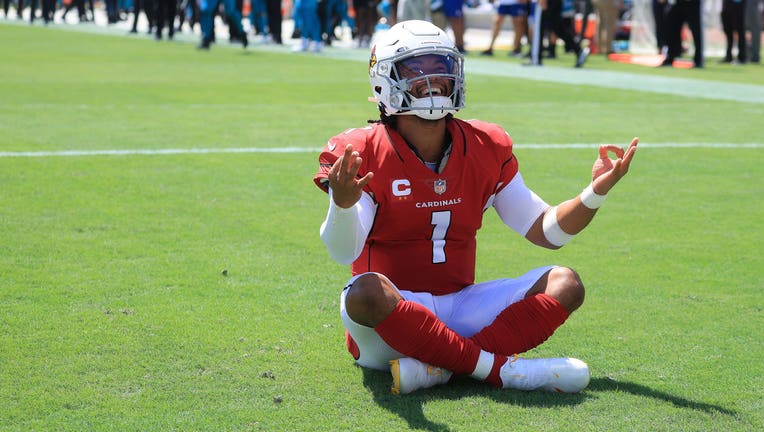 JACKSONVILLE, FLORIDA - SEPTEMBER 26: Kyler Murray #1 of the Arizona Cardinals celebrates a touchdown in first quarter in the game against the Jacksonville Jaguars at TIAA Bank Field on September 26, 2021 in Jacksonville, Florida. (Photo by Sam Greenwood/Getty Images)

PHOENIX - The drama is over and the decision is in: Kyler Murray and the Arizona Cardinals have made a long-term commitment to each other with a new contract that would keep the quarterback in the desert through the 2028 season.

The two-time Pro Bowl selection was taken with the No. 1 overall pick out of Oklahoma after he won the Heisman Trophy and has largely delivered in his quest to make the Cardinals a better franchise.

The team announced the new contract on July 21. ESPN reported that the contract could be worth $230.5 million, with $160 million guaranteed.

Murray’s new contract puts him on par with other young star quarterbacks throughout the league like Buffalo’s Josh Allen, who signed a deal worth more than $250 million last season. Murray will make an average of more than $46 million per season, which is similar to other elite quarterbacks such as Green Bay’s Aaron Rodgers, Kansas City’s Patrick Mahomes and Allen.

Listed at just 5-foot-10, some around the NFL worried the 24-year-old Murray was too short to be a dominant pro quarterback, but his stats through three seasons prove otherwise.

He’s completed nearly 67% of his passes through 46 career games for 11,480 yards and 70 touchdowns while rushing for 1,786 yards and 20 TDs. Murray is particularly good at extending plays with his feet, using his scrambling ability for spectacular gains.

Arizona had a 5-10-1 record during his rookie season in 2019, but the Cardinals improved to 11-6 last season before losing to the Los Angeles Rams in the NFC Wild Card round during the playoffs.

The deal brings an end to a strange, passive-aggressive offseason contract squabble. At one point, Murray wiped his social media accounts of all references to the Cardinals and it wasn’t clear whether the franchise was ready to make a long-term investment.

The two sides appeared to be on a path toward reconciliation over the past few months. GM Steve Keim said that there was "zero chance" Murray would be traded and the quarterback put on social media that he wanted to win Super Bowls with the Cardinals and called Arizona "home."

For all the bluster, Cardinals GM Steve Keim said he was never overly concerned. He said he met with Murray’s parents in the offseason, which helped raise his confidence a deal would happen.

"We had great communication with them, felt great about the dialogue, and understood what the expectations were for both sides," Keim said. "Then I just had to get through the draft and free agency, which takes a lot of my time, so once I was able to do that, I was able to focus on the contract. I feel both sides are pretty happy."

It was clear Murray wasn’t completely comfortable with the acrimonious back and forth between his agent and the team. He even seemed to hint that some of the social media antics were Burkhardt’s idea — grinning at the agent while responding to a question about offseason drama.

"I’m a quiet dude when it comes to social media," Murray said. "Just to sit there and take all the shots, it is what it is. But I understood it’s part of the business."

On Friday afternoon, the quarterback was all smiles in a dapper blue suit at the team’s practice facility. His parents were in attendance, along with his bulldog Swoosh, who could be heard panting throughout the press conference as Murray thanked all the family, friends, teammates and coaches who helped him along the way.

He also made it a point to thank the Cardinals, who took him with the No. 1 overall pick in 2019 out of Oklahoma.

"I’m so grateful and honored for the confidence they’ve shown in me," Murray said. "The faith they showed to take a 5-foot-10 quarterback, that’s never been done before, and I understood the heat they would take for doing that."

The Cardinals had already picked up Murray’s fifth-year option for the 2023 season, further easing tensions, but Thursday’s news puts an end to any lingering questions.

Now Murray can take the field for training camp next week knowing his football future is secure. The Cardinals face plenty of challenges in 2022, including navigating the first six games without star receiver DeAndre Hopkins, who was suspended for violating the NFL’s performance-enhancing drug policy.

Murray and fourth-year coach Kliff Kingsbury are under significant pressure to produce this fall after last year’s late-season collapse. The Cardinals looked like one of the NFL’s best teams in 2021 after starting with a 10-2 record but lost four of their last five regular-season games before getting beat 34-11 by the Rams in the wild-card round.