Arizona’s quarterback still doesn’t have the long-term contract extension he’s seeking, but was a full-go for one of the Cardinals’ final mandatory offseason workouts.

"There’s no doubt to me he’s the leader of this franchise," Cardinals coach Kliff Kingsbury said on June 14. "We’re about to make him I’m sure the highest-paid player in franchise history and so he understands what comes with that and the guys know what he can be at his best. Anytime we can have the whole band out there, things pick up."

The No. 1 overall pick of the 2019 draft, Murray has been one of the NFL’s most dynamic quarterbacks in two seasons in the desert. He’s already a two-time Pro Bowler and last season led the Cardinals to the playoffs for the first time since 2015.

Murray, who didn’t speak to reporters on Tuesday, is set to earn $5.5 million this season and $29.7 million next year after his fifth-year option was picked up. He’s looking to the future, though, seeking a long-term deal in the neighborhood of Buffalo quarterback Josh Allen’s $254 million pact signed last offseason.

Progress toward signing it has been slow, leading to a bit of tension in the desert.

Murray wiped his social media accounts of any Cardinals’ references at one point and his agent, Erik Burkhardt, sent an all-caps statement to media outlets pushing for the quarterback to receive a lucrative long-term deal. 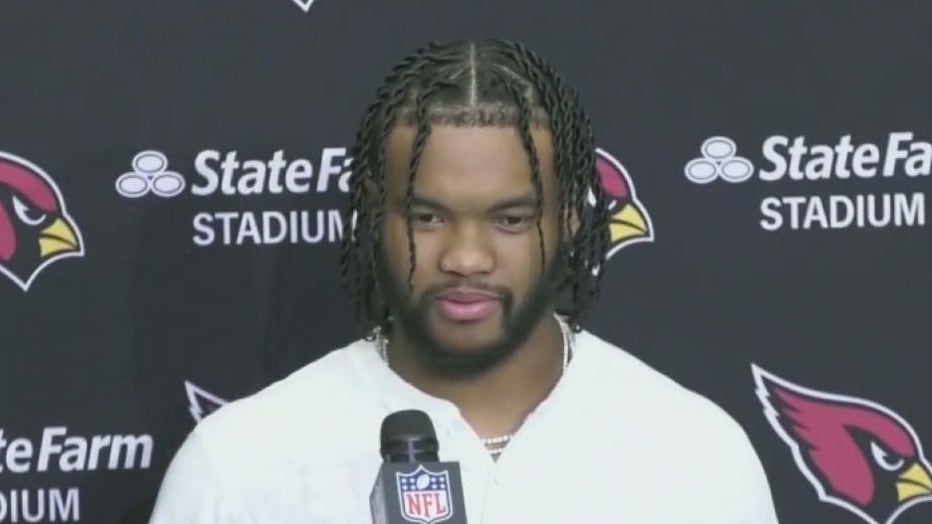 "As a team, we’ve got to keep going. The wheel does not stop," Cardinals offensive lineman Justin Pugh said. "We’d love to have everyone here participating, of course we would, but they’re voluntary workouts and Kyler doesn’t have to be here. He’s obviously played really good football and wants to get a contract. This is a finite period of time where we have an ability to make a high dollar amount and he wants to cash in."

If contract negotiations continue to drag out, the tension could continue to grow, possibly leading to a holdout at the start of training camp late next month.

Kingsbury is hoping it doesn’t come to that.

"Just personally, I’m being selfish here," he said. "I would love for him to be there first day of training camp."

The Cardinals have one more offseason workout on Wednesday after opting to cut the mandatory minicamp from three days to two. That gives them a little over a month to work out a deal with Murray before training camp starts.