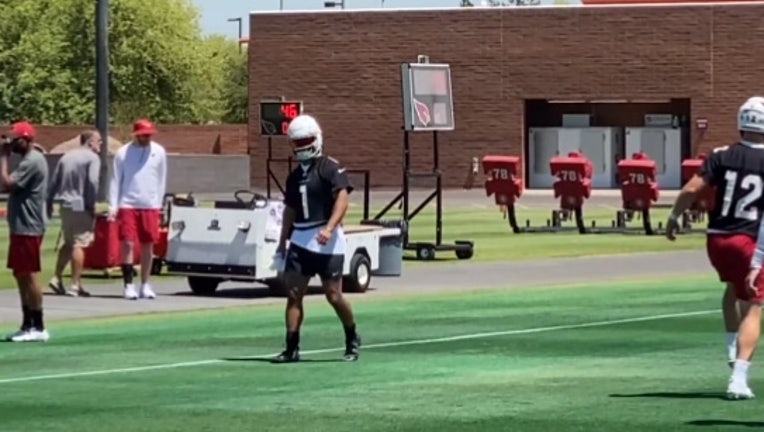 TEMPE, Ariz. - Arizona Cardinals coaches and teammates welcomed Kyler Murray’s return to the practice field on June 1, saying it was fun to watch their star quarterback do his usual magic throwing a football.

One thing’s certain: It sure beats watching his social media accounts.

"It was good to have him," Cardinals coach Kliff Kingsbury said.

Murray returned to the field for the second set of Arizona’s voluntary offseason workouts after missing the team’s first practices in May.

It’s been an eventful offseason for the quarterback, who has been in a passive-aggressive contract spat with Arizona management, even wiping his social media accounts of any Cardinals references at one point.

Murray is entering the fourth year of his rookie contract and wants a new long-term deal. It appears he’s looking for a contract in the neighborhood of Buffalo quarterback Josh Allen’s $254 million pact he signed last offseason.

Murray is already a two-time Pro Bowl selection, but there were grumblings that his leadership wasn’t ideal during the team’s late-season collapse last season. The Cardinals started with a 10-2 record, which was the best mark in the NFL, before losing four of their last five games and getting bounced from the playoffs in an ugly opening-round loss to the Los Angeles Rams.

There didn’t seem to be any lingering discontent on Wednesday. Cardinals right tackle Kelvin Beachum praised Murray, saying he’s going through the growing-up process that all players must navigate.

"He’s always had that presence, that was never in question," Beachum said. "It’s just all the intangibles that he continues to fine tune. I’m excited to see that maturation process continue to occur."

Murray didn’t talk with reporters on Wednesday, but his presence at the workout is another sign that his relationship with the franchise has improved considerably over the past several weeks. General manager Steve Keim and coach Kingsbury were both quick to praise Murray in April after the draft.

The GM is optimistic a deal will get done.

"Nothing’s changed," Keim said. "The way we’ve approached it is we have free agency, we have the draft, then we’ll take a deep breath and refocus. It’s the same reason every other player who has been a third-year quarterback, (their deal) has been done in the middle of the summer to the late summer. It’s no different for us. It’s just sort of the way the system works."

Murray wasn’t the only veteran who showed up for Wednesday’s workout after missing the first voluntary workouts. Newly acquired receiver Marquise "Hollywood" Brown was on the field, as were offensive linemen such as D.J. Humphries, Justin Pugh and Beachum.

"A lot of starters back," Kingsbury said. "I thought the work was good. Spirited."

The Cardinals were on the field for the first time since cornerback Jeff Gladney died in a car accident early Monday morning in Dallas. He was 25.

Gladney was signed during the offseason and hadn’t played a game yet for the Cardinals. Still, several Arizona players, particularly the defensive backs, had gotten to know the cornerback over the past couple of months.

Kingsbury said he addressed the team on Wednesday. The team also broke into smaller groups to talk about Gladney’s death.

"It’s hard to handle," Kingsbury said. "But I think it gives all our players perspective on how precious life is. I know a lot of guys want to make sure they’re living the right way because you never know."