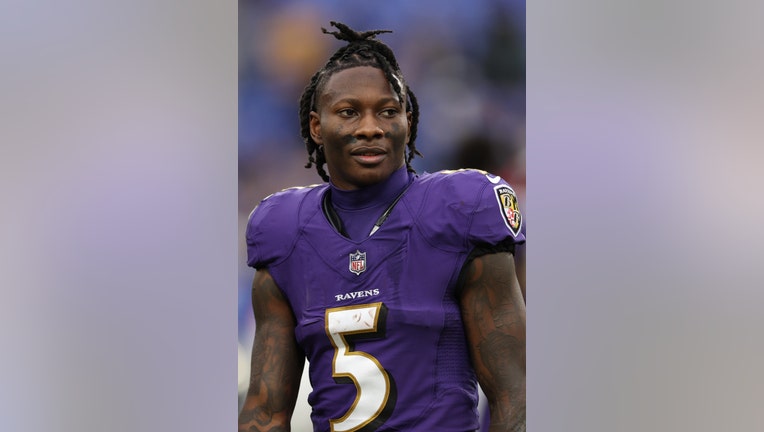 TEMPE, Ariz. - If the Arizona Cardinals and quarterback Kyler Murray are still fighting these days, it’s awfully hard to tell.

The Cardinals pulled off a draft-day trade Thursday night to help their star quarterback, acquiring receiver Marquise Brown from the Baltimore Ravens in exchange for the No. 23 overall pick. Brown and Murray were college teammates at Oklahoma and will now be reunited in the desert.

The move shores up one big area of need for the Cardinals, who were hunting for a No. 2 receiver to pair with three-time All-Pro DeAndre Hopkins. Brown caught 91 passes, including six touchdowns, for 1,008 yards last season for the Ravens.

"I had a very strong feeling the board was going to fall the way that it did," Arizona GM Steve Keim said. "And I’m awfully glad that we made this trade."

Keim said Brown was a quality receiver that the team wanted regardless of his relationship with Murray. But the fact that Brown — whose nickname is "Hollywood" — should have immediate chemistry with Arizona’s quarterback is certainly a bonus.

Keim looked at his phone as he described Murray’s positive reaction to the trade.

Arizona also received Baltimore’s third-round pick in the deal. Keim also said that the Cardinals have picked up Brown’s fifth-year option, meaning he’s under contract for the next two seasons.

The Cardinals came into the draft with several needs, though they weren’t desperate at any one position. Arizona did lose a couple key pieces in free agency, including franchise all-time sack leader Chandler Jones and receiver Christian Kirk.

The 5-foot-9, 180-pound Brown seems like a logical replacement for Kirk, who is now with the Jaguars. Brown was the No. 25 overall pick in 2019, which is nearly the exact same pick that the Cardinals gave up three years later to acquire him.

"The more playmakers we can have, the better," Cardinals coach Kliff Kingsbury said.

Brown and Murray played together in college for the Sooners in 2018 when Murray won the Heisman Trophy. They’re now together in the NFL on a team that’s built to win now.

Arizona has been a team on the rise — for the most part — since it drafted Murray with the No. 1 overall pick in 2019.

The Cardinals had a 5-10-1 record in Murray’s rookie season and improved to 8-8 in 2020. They started last season with seven straight wins and improved to 10-2 before losing four of five games to end the regular season. The eventual Super Bowl champion Los Angeles Rams easily beat the Cardinals 34-11 in the wild-card round.

The Cardinals struggled on offense during their late-season swoon after Hopkins got hurt. Brown gives them another high-caliber option should Hopkins miss any time in the upcoming season.

Arizona’s late-season collapse caused some franchise friction. Murray and the team have been in a passive/aggressive contract spat as the two-time Pro Bowler seeks a lucrative long-term deal.

The two sides seem to be on better terms as of the past few weeks. Adding Brown probably won’t hurt.

The Cardinals took linebackers with their first-round pick in each of the past two years: Isaiah Simmons was the No. 8 overall selection in 2020 while Zaven Collins was No. 16 in 2021. Simmons has grown into a key piece of Arizona’s defense while Collins had an up-and-down rookie season, though the team is still encouraged about his long-term future.

Is Kyler Murray disgruntled, or does he just like to clean up his social media pages? It’s the question Arizona Cardinal fans are asking after the franchise quarterback removed any mentions of the Cardinals from his Instagram page.