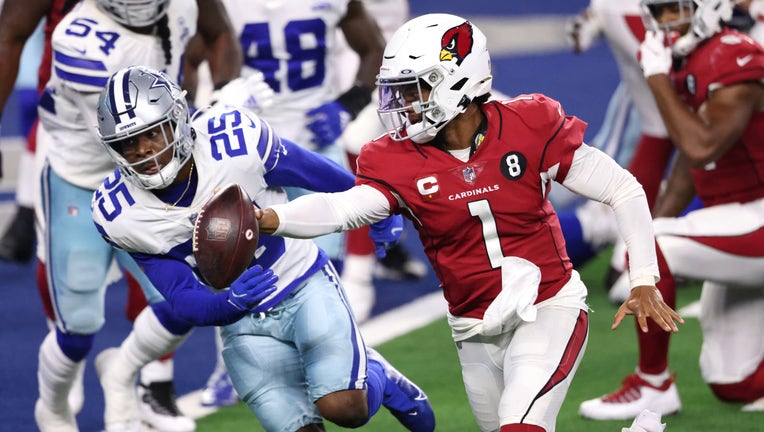 ARLINGTON, TEXAS - OCTOBER 19: Kyler Murray #1 of the Arizona Cardinals runs for a touchdown against Xavier Woods #25 of the Dallas Cowboys during the third quarter at AT&T Stadium on October 19, 2020, in Arlington, Texas. (Photo by Ronald Martin

TEMPE, Ariz. - Fans will be given an all-access look at the Arizona Cardinals in 2022 as the team will be featured on HBO's "Hard Knocks In Season."

"Hard Knocks In Season" debuted last year and featured the Indianapolis Colts. It's a spin-off of the popular training camp show "Hard Knocks."

In 2016, the Cardinals were featured in Amazon's "All or Nothing," which chronicled their 2015 season, ending with a loss in the NFL Championship game to the Carolina Panthers.

This will be the first time the Cardinals have been featured in the "Hard Knocks" franchise.

"Last season Hard Knocks made an unprecedented leap, documenting an NFL regular season in real time for the first time ever with the Indianapolis Colts," NFL Films Vice President and Senior Coordinating Producer Keith Cossrow said in a statement. "It was a vivid and illuminating look at the life of an NFL team. This season, we are eager to build on that success and go even further with one of the most exciting teams in the NFL. We can’t wait to get to work in Arizona, and we thank Michael Bidwill, Steve Keim, Coach Kingsbury and the entire Cardinals organization for this opportunity."