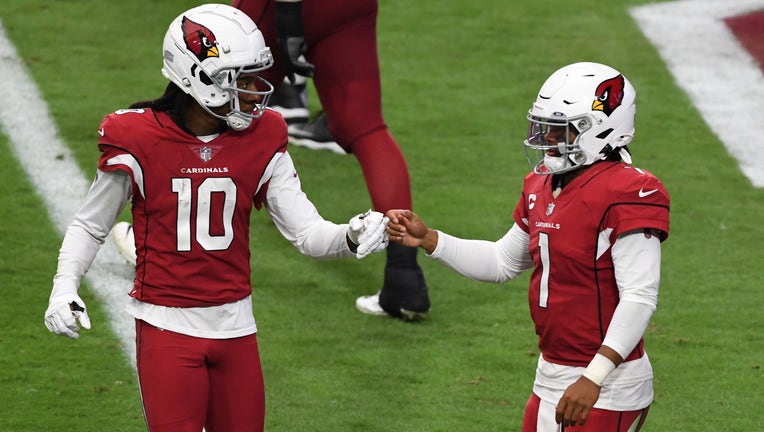 GLENDALE, ARIZONA - SEPTEMBER 20: Kyler Murray #1 of the Arizona Cardinals celebrates with DeAndre Hopkins #10 after scoring his second touchdown of the game against the Washington Football Team during the fourth quarter at State Farm Stadium on Sept

The star wide receiver received the ban on Monday, and hours after he released a statement explaining his actions, Murray offered some words of support on Twitter.

"Hop’s character has never been in question… we got you family," Murray tweeted.

Hopkins said he was "confused and shocked" by his positive performance-enhancing drug test.

"In my 10-year NFL career, I have never tested positive for using performance enhancing drugs," the statement read.

"To learn that my November test came back with trace elements of a banned substance, I was confused and shocked.

"I am very mindful of what I put in my body and have always taken a holistic approach, so I am working with my team to investigate how this could’ve happened. But even as careful as I have been, clearly I wasn’t careful enough. For that I apologize to Cardinals fans, my teammates, and the entire Cardinals organization. I never want to let my team down.

"I fully intend to get to the bottom of this. As soon as I have more information I will share it."

It’s unclear what he tested positive for. ESPN first reported the suspension.

"DeAndre Hopkins of the Arizona Cardinals has been suspended without pay for the first six games of the 2022 regular season for violating the NFL policy on performance-enhancing substances," an NFL spokesperson said in a statement obtained by Fox News Digital.

"Hopkins is eligible to participate in all preseason practices and games. He will be allowed to return to the Cardinals’ active roster following the team’s sixth regular-season game."

Hopkins is a five-time Pro Bowler and three-time All-Pro wide receiver. He is about to enter his third season with the Cardinals after Arizona acquired him in a blockbuster 2020 trade with the Houston Texans.

Since then, he’s been one of the top targets for Kyler Murray. He played all 16 games in his first season with Arizona and was selected to a Pro Bowl. He had 115 catches for 1,407 yards and six touchdowns. He only managed to play in 10 games in 2021 due to injuries. He had 42 catches for 572 yards and eight touchdowns.

The Cardinals were required by the NFL to host a game outside the United States by 2023 after being awarded the hosting rights to the Super Bowl that will be played in February 2023.

Kyler Murray seems happy, so Cards are too after NFL draft

The Arizona Cardinals did a good job of filling perceived needs during this year’s NFL draft, adding a talented young receiver in a first-round trade, a pass-catching tight end in the second round, and a pair of intriguing edge rushers in the third round.

The move shores up one big area of need for the Cardinals, who were hunting for a No. 2 receiver to pair with three-time All-Pro DeAndre Hopkins. Brown caught 91 passes, including six touchdowns, for 1,008 yards last season for the Ravens.