Is Kyler Murray disgruntled, or does he just like to clean up his social media pages? It’s the question Arizona Cardinal fans are asking after the franchise quarterback removed any mentions of the Cardinals from his Instagram page.

Murray, who led the Cardinals to an incredible 7-0 start, believes the team is framing him as the scapegoat for their troubles, according to ESPN.

Members of the organization have reportedly said that Murray is self-centered, immature, and a finger-pointer, the network reported. The Cardinals are expecting Murray to improve as a leader, and they believe he needs to focus on his maturity and on-field body language, per the NFL Network.

Despite the ESPN report, the Cardinals say they are excited about Murray’s future.

"Nothing has changed regarding our opinion and high regard for Kyler Murray. We, as a team, and Kyler, individually, have improved each year he's been in the league. We are excited to continue that improvement in 2022 and are excited that Kyler Murray is the quarterback leading us," the team said in a statement obtained by Pro Football Talk.

In the 34-11 playoff loss to the Rams, Murray completed 55.9% of his passes for 137 yards with no touchdowns and two interceptions. The star quarterback was without top wideout DeAndre Hopkins, who remained sidelined after Week 14.

After three seasons in the NFL, Murray could get a contract extension this offseason. He has one year left on his rookie deal, but the team can exercise a fifth-year option. 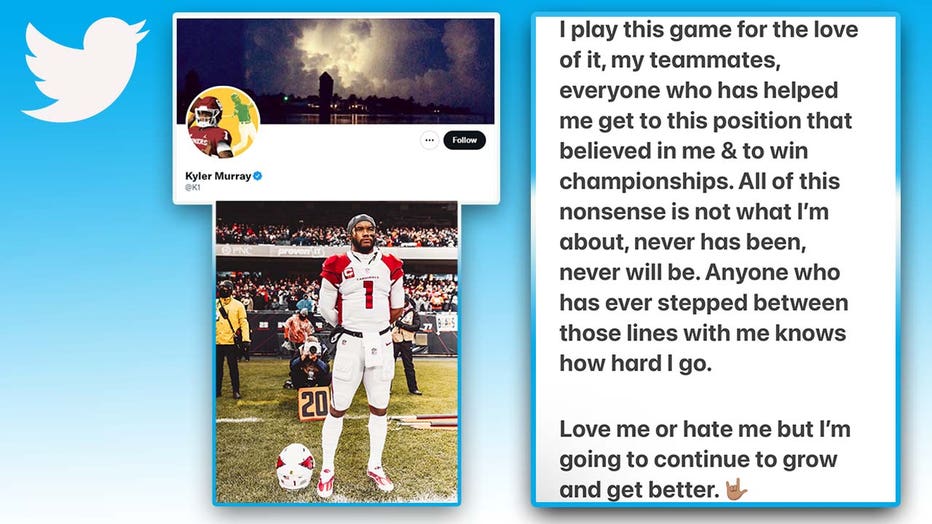 "All of this nonsense is not what I'm about, never has been, never will be," Cardinals QB Kyler Murray said in response to a report that he "is self-centered, immature, and a finger-pointer."