Fans of the Arizona Cardinals were seen on their backyard Ring Doorbell camera cheering for their team's win in overtime against the Las Vegas Raiders on Sunday, Sept. 18. Video courtesy of Liz Miller.

LAS VEGAS (AP) — Byron Murphy Jr. scooped up Hunter Renfrow’s fumble and returned it 59 yards for a touchdown with 3:51 left in overtime, and the Arizona Cardinals rallied from a 20-point deficit in the second half before running away with a wild 29-23 victory over the Las Vegas Raiders on Sunday.

Kyler Murray scrambled for a 3-yard touchdown on the final snap of regulation before hitting A.J. Green for the tying 2-point conversion for the Cardinals (1-1), who trailed 23-7 with less than nine minutes left in regulation.

The Raiders stopped Murray on downs on Arizona’s opening drive of overtime, but Renfrow then made a catch and fumbled for the second consecutive play. Isaiah Simmons knocked it loose, and Murphy snagged the ball and sprinted down the Cardinals’ sideline to the end zone with his ecstatic teammates in pursuit of a frenzied celebration.

Murphy nearly ruined his own heroics when he released the ball from his hand right at the goal line, but video review determined he barely scored.

Arizona followed up its season-opening blowout loss to Kansas City by falling behind 20-0 in the first half in Vegas, but coach Kliff Kingsbury’s team transformed after the break. Murray passed for 277 yards and rushed for 28 more while flummoxing the Vegas defense with his elusiveness.

Davante Adams and Darren Waller caught early touchdown passes from Derek Carr for the Raiders (0-2), who had the ball for less than 10 minutes in the second half while Murray worked his magic. Carr passed for 252 yards — just 42 after halftime —- as Las Vegas lost a home opener for the first time since relocating to Nevada.

The game showcased the heights and depths of Murray’s incredible talent in his second outing since his $230.5 million, five-year contract extension was finalized.

Murray passed for just 53 yards in the first half, but racked up 188 yard through the air and 28 more on the ground in the second half along with several unbelievable displays of his unique combination of athleticism and football smarts. 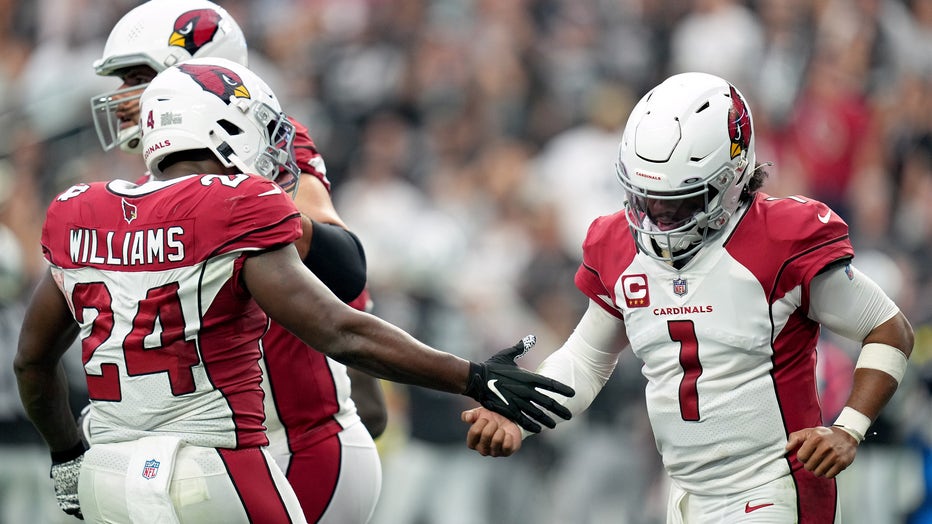 LAS VEGAS, NEVADA - SEPTEMBER 18: Kyler Murray #1 of the Arizona Cardinals celebrates with Darrel Williams #24 after a touchdown in the fourth quarter against the Las Vegas Raiders at Allegiant Stadium on September 18, 2022 in Las Vegas, Nevada. (Pho

Murray hit Greg Dortch for an early TD, and Darrel Williams rushed for a score with 8:13 left before Murray made a jaw-dropping improvisational run for a 2-point conversion, running horizontally across the field during roughly 20 seconds with the ball.

Murray then led Arizona on a 73-yard TD drive in the final 4:43 of regulation, capping it with his cool TD scramble on fourth down as time expired after three incompletions.

Moments earlier, Murray threw an incompletion on fourth down from the Raiders 6, but Roderic Teamer’s defensive holding penalty — Vegas’ 10th flag of the day — kept the drive alive with 16 seconds left.

Arizona took a delay of game penalty before attempting the conversion from the Vegas 7, but Murray still hit Green with a pinpoint pass in the back of the end zone.

Arizona won the overtime coin toss, but the Raiders got the ball back when backup Vegas safety Duron Harmon knocked the ball out of Marquise Brown’s hands for an incompletion on fourth-and-1 from the Vegas 37.

Las Vegas was very near field goal range for Daniel Carlson, who made two earlier field goals to stretch his streak to 27 straight overall and 40 straight at Allegiant Stadium — but Renfrow’s fumble meant he never got a chance.

The Cardinals got to the Las Vegas 7 before turning the ball over on downs with 12:31 to play, and a stadium security guard also got knocked down roughly by Zach Ertz while the Cardinals tight end dived to make a catch on fourth down. The guard eventually got up and walked off the field.

Raiders owner Mark Davis missed the game because he was in Connecticut with his Las Vegas Aces while they won their first WNBA championship. The result was announced late in the third quarter to applause at Allegiant Stadium.

Adams had just two catches for 12 yards, but his grandparents got to see him play live for the first time in the NFL. They watched from the Allegiant Stadium suite that the Bay Area native says he paid roughly $500,000 to rent for the season.

Cardinals: RB James Conner was slowed by an ankle injury after his first carry of the second half.

Raiders: DL Bilal Nichols injured his shoulder in the second half and didn’t return.

Raiders: At the Tennessee Titans on Sunday.