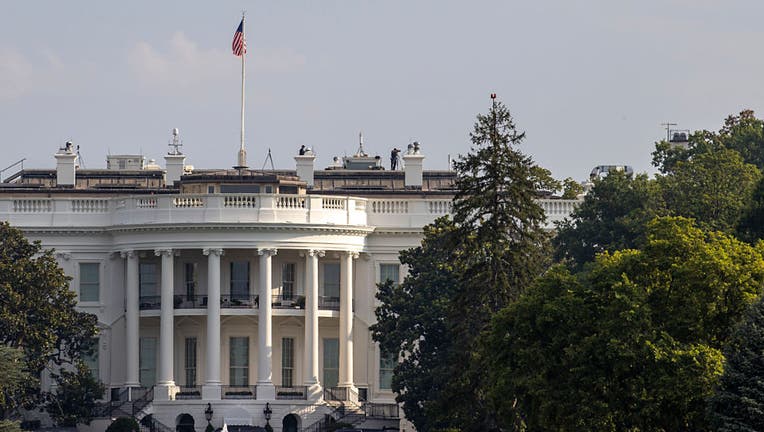 FILE - The flag at White House is at full staff on July 19, 2020 in Washington, DC. Rep. John Lewis, died at 80 years old, was an icon leader in the civil rights moment and the Voting Rights Act and served as a United States Congressman for 33 years. (Photo by Tasos Katopodis/Getty Images)

WASHINGTON - The Trump administration wants $377 million in the next coronavirus relief bill for a long-delayed modernization of the West Wing, but the timetable for construction is yet to be determined.

The sum, included in the draft aid legislation from Senate Republicans, would also cover a new security screening facility for the Eisenhower Executive Office Building in the White House complex.

While lawmakers, including Republicans, have balked at the administration's request for more than $1 billion in the bill for a new FBI headquarters in Washington, the West Wing plan has drawn relatively little scrutiny. The administration says the White House work would “increase the White House campus’s ability to detect, mitigate and alleviate external security and pandemic threats."

The West Wing has not had a full modernization since 1933, according to the General Services Administration, which maintains most of the White House complex and would handle the upgrades. Renovations have been planned and delayed by previous administrations — most recently by President Barack Obama in 2013 — in part because no president has wanted to temporarily give up the Oval Office for months or longer to allow for the substantial work to be done.

Plans drawn up in 2013 envisioned Obama and West Wing staffers working from the historic EEOB, once the headquarters of the Departments of State, War and Navy, for an extended period of time.

The U.S. Secret Service did not comment on the proposed security upgrades.

A temporary security screening facility for the EEOB was constructed in 2013, in part in preparation for the anticipated West Wing overhaul that never came to pass.

GSA press secretary Pamela Pennington said that as a result of the delays, “the building’s infrastructure has continued to deteriorate and the need for updating has only increased. Further, this project is even more necessary given the current challenges as a result of COVID-19 and the need for modern HVAC systems to ensure proper circulation within the workspace."

Even if Congress approves the money, the fate of the project could hinge on the November election and whether the occupant of the Oval Office next year is willing to proceed with the work.

Pennington said that if the funding is approved, design and site work would begin almost immediately, “but an actual project schedule is yet to be determined."