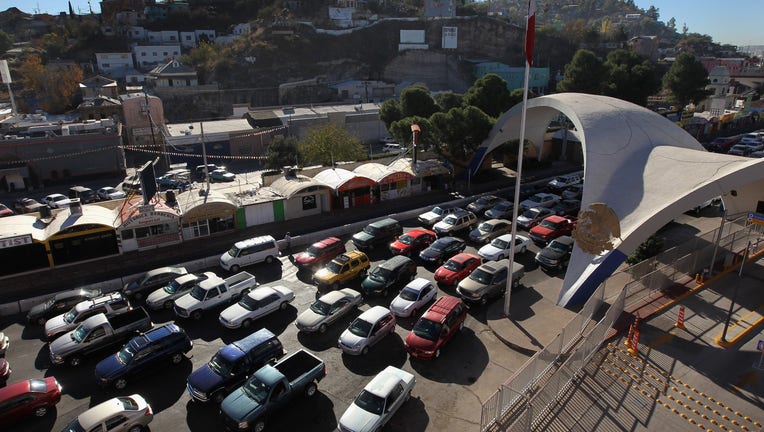 Cars wait to pass from Mexico into the United States at the border crossing in Nogales, Arizona. (File photo by John Moore/Getty Images)

PHOENIX - For months, asylum seekers have been prohibited from filing their claims at U.S. border crossings under a much-criticized Trump administration policy. Now some are sprinting down vehicle lanes or renting cars to try to make it inside the U.S.

The migrants’ efforts are causing traffic delays at Arizona crossings because U.S. Customs and Border Protection officials had to barricade lanes used by cars legally entering the U.S. from Mexico, officials said.

Shoppers, teachers and visitors traveling to the U.S. through Nogales, Mexico, endured up to five-hour waits Monday and over the weekend, causing concerns among local officials whose tax base relies on Mexican shoppers, especially during the holiday season.

In a statement, Customs and Border Protection said it’s committed to the safety of border crossers, adding that there’s been an increase of incursions through vehicle lanes “by asylum seekers attempting to evade established entry processes.”

“These tactics interfere with CBP officers conducting their responsibilities and exacerbates wait times for daily commuters,” the agency said in a statement. “CBP will not allow ports to be overrun, or unauthorized entry.”

The traffic jams could hurt sales at stores in Nogales, Arizona that depend on Mexican shoppers during the holiday season, said Mayor Arturo Garino.

Garino, a part-time teacher, said some students and teachers who live in Mexico but attend and work at schools across the border in the U.S. have been leaving their homes as early as 5 a.m. to arrive on time.

Garino said Mexican authorities were not doing enough to stem the problem. The Arizona Daily Star reported the Nogales, Sonora, police officers were checking cars headed north to the border on Monday afternoon.

The metal barricades are large and are meant to seal off traffic lanes.

About 3,000 migrants are living in Nogales, Mexico as they wait their turns to seek asylum, said Katie Sharar, communications director for the Kino Border Initiative, a religious-based group that provides meals to needy migrants on the Mexican side of the border.

Under a policy by the Trump administration known widely as “metering,” the asylum-seekers must wait in an unofficial line in Mexico until U.S. authorities call them up in a process that usually lasts several months.

Another policy, colloquially known as “Remain in Mexico,” requires asylum seekers to return to Mexico after they have made credible fear claims to justify their asylum requests and wait there while their immigration cases are pending.

“I think there’s just a lot of desperation and uncertainty. They don’t know what’s happening to them, they don’t know how the policy changes are gonna affect them,” Sharar said.

Sharar said she wasn’t familiar with the migrants who have run through vehicle lanes.

Customs and Border Protection did not respond to email and phone messages regarding questions about the migrants who rushed the border, what countries they come from and whether they were detained or faced criminal charges.

Arizona Gov. Doug Ducey, a Republican, said his first concern is public safety and that he is confident that U.S. officials will resolve the border traffic problems.