WASHINGTON - Joe Biden's campaign said Monday that the presumptive Democratic presidential nominee opposed the “defunding the police” message amid growing calls to do so by activists across the country following George Floyd's death.

“As his criminal justice proposal made clear months ago, Vice President Biden does not believe that police should be defunded," Biden campaign spokesman Andrew Bates said. "He hears and shares the deep grief and frustration of those calling out for change, and is driven to ensure that justice is done and that we put a stop to this terrible pain."

Bates added that Biden supports the “urgent need for reform,” including more spending on public schools, summer programs and mental health and substance abuse treatment separate from funding for policing, “so that officers can focus on the job of policing.”

The campaign spells out its criminal justice plan online, which includes a $300 million investment in community policing initiatives.

“This also means funding community policing programs that improve relationships between officers and residents, and provides the training that is needed to avert tragic, unjustifiable deaths. This funding would also go towards diversifying police departments so that they resemble the communities in which they serve,” Bates said. 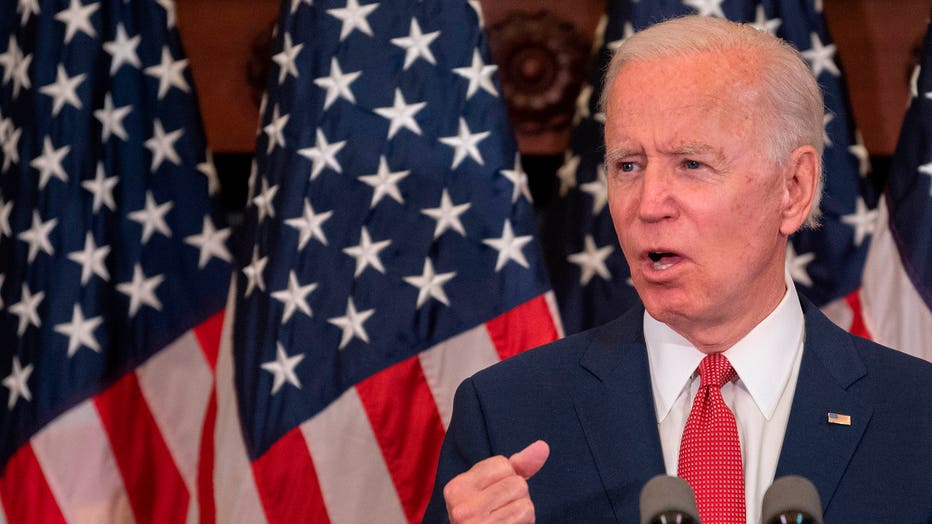 Former vice president and Democratic presidential candidate Joe Biden speaks about the unrest across the country from Philadelphia City Hall on June 2, 2020, in Philadelphia, Pennsylvania. (Photo by JIM WATSON/AFP via Getty Images)

Floyd’s death on May 25 in the custody of Minneapolis police has sparked protests across the country for an end to police brutality, leading to calls to defund police. Supporters say it isn’t about eliminating police departments or stripping agencies of all of their money, but rather about addressing systemic problems in policing in America and spending more on what communities across the U.S. need, like housing and education.

A majority of the Minneapolis City Council announced support to dismantle the local police department and replace it with a community-based public safety model.

Democrats have also proposed a sweeping overhaul of police oversight and procedures. The Justice in Policing Act would limit legal protections for police, create a national database of excessive-force incidents and ban police choke holds, among other changes, according to an early draft.

It is the most ambitious change to law enforcement sought by Congress in years.

Biden’s statement on the issue came after President Donald Trump’s re-election campaign held a call with reporters on Monday to reiterate Trump’s opposition to the “defunding the police” message and called on Biden’s camp to clarify his position.

"LAW & ORDER, NOT DEFUND AND ABOLISH THE POLICE," Trump tweeted on Monday. "The Radical Left Democrats have gone Crazy!"

The Trump campaign alleged that Biden "does not have the strength to stand up to extremists" on the left.

"The question is, 'Where has Joe Biden been?'" Tim Mutaugh, the Trump campaign's communications director, said prior to the release of Biden's statement, according to USA Today. "We're now days into this movement in the Democrat Party and Joe Biden has managed only a feeble, 'No comment.'“

Biden’s record on criminal justice has been a topic of debate in the 2020 presidential election. Some have blamed the 1994 crime bill he helped write while a U.S. senator for the mass incarceration of racial minorities over the past two decades.

His call for more national policing reforms and oversight following Floyd’s death has also reportedly created a rift with law enforcement groups who once supported the former vice president.

“Clearly, he’s made a lot of changes the way candidates do during the primary process, but he kept moving left and fell off the deep end,” Bill Johnson, executive director of the National Association of Police Organizations, the umbrella organization for Police Benevolent Association chapters, told Politico.

“For Joe Biden, police are shaking their heads because he used to be a stand-up guy who backed law enforcement,” Johnson said. “But it seems in his old age, for whatever reason, he’s writing a sad final chapter when it comes to supporting law enforcement.”

His campaign statement came on the same day Biden traveled to Houston to meet with Floyd’s family to give his condolences.