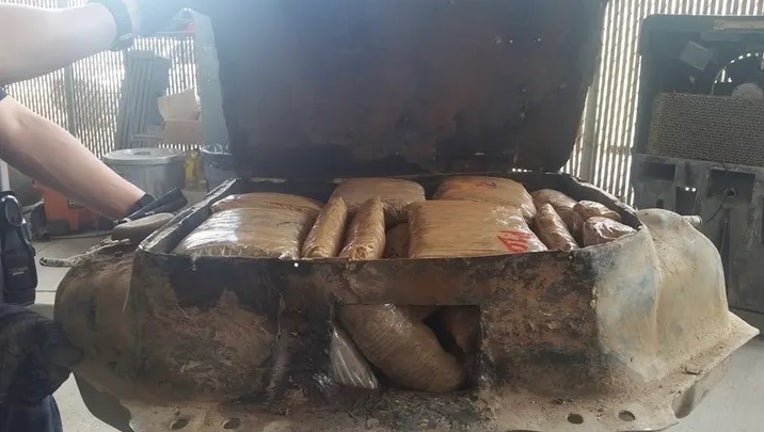 Border officers at the Port of Nogales, Arizona, seized fentanyl, methamphetamine and cocaine hidden in a gas tank on Thursday. (U.S. Customs and Border Protection)

NOGALES, Ariz. - Customs and Border Protection (CBP) agents seized more than 72,000 fentanyl pills and more than 44 pounds of methamphetamine being smuggled into the U.S. on Thursday.

The officers at the Port of Nogales, Arizona, also found 2.45 pounds of fentanyl powder and 2.9 pounds of cocaine hidden in a vehicle's gas tank.

Fentanyl overdoses are the leading cause of death for people in the U.S. ages 18 to 45, according to U.S. health officials.

Seizures of fentanyl at the border have become a regular occurrence in recent months. In July, seizures jumped 200% amid concerns over overdose deaths.

The synthetic opioid is typically used for treating severe pain and is 50-100 times more potent than morphine. Illicit fentanyl is now primarily made in Mexico from precursors manufactured in China and then trafficked across the southern border.

VIDEO: More than over 4 million fentanyl pills seized at Arizona border checkpoint in 2022

It is frequently mixed with other drugs, meaning users may not be aware they are ingesting it.

The Drug Enforcement Administration has previously warned of a "nationwide spike" in mass fentanyl overdoses and has said the drug is killing Americans at an "unprecedented rate." A 2020 DEA report also notes that most fentanyl and the precursor chemicals used to manufacture the drug originate in China.