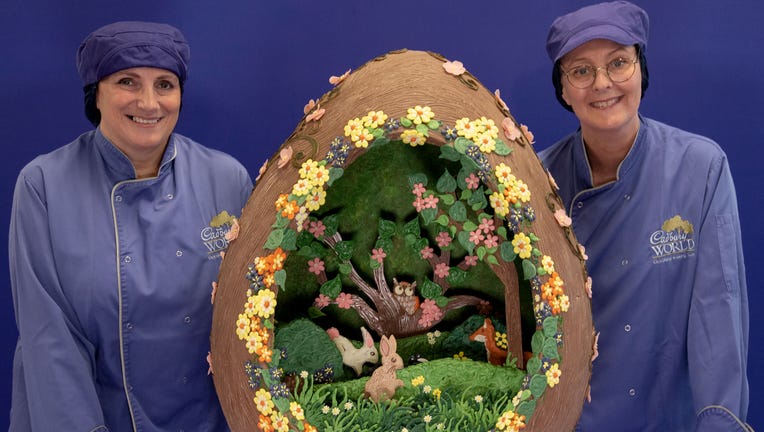 Dawn Jenks and Donna Oluban took three days to make the giant chocolate treat at Cadbury World, an attraction located outside of Birmingham, England, that shares all about the history and making of British confectioner Cadbury chocolate.

The egg is made of solid milk chocolate and features a detailed Easter scene, complete with an intricate array of flowers, grass and cherry blooms trees. It also features a hand-crafted owl, two bunny rabbits and a fox.

The company said it has the equivalent of 889 standard bars of Cadbury Dairy Milk.

"Dawn and Donna are renowned for creating egg-cellent Easter chocolate creations, and they’ve definitely continued the tradition with this year’s masterpiece," Diane Mitchell, a marketing manager at Cadbury World, said in a statement.

RELATED: 'Boozy Bunny' at Disney Springs is the Easter treat for grownups

The chocolate masterpiece is on display in Cadbury World’s Chocolate Making zone for visitors to see throughout the Easter holiday and until the end of April, the company said.

Cadbury first introduced its popular Easter egg in 1875, made with dark chocolate. It later unveiled the creme-filled egg in 1923, though the version most know today wasn’t sold on store shelves until 1971, according to its website.

The treat has since become somewhat of a sweet Easter staple, similar to the popularity of Peeps or chocolate bunnies.