The city of Fort Bragg in Mendocino County is named for Confederate Gen. Braxton Bragg, who is accused of keeping more than 100 slaves. 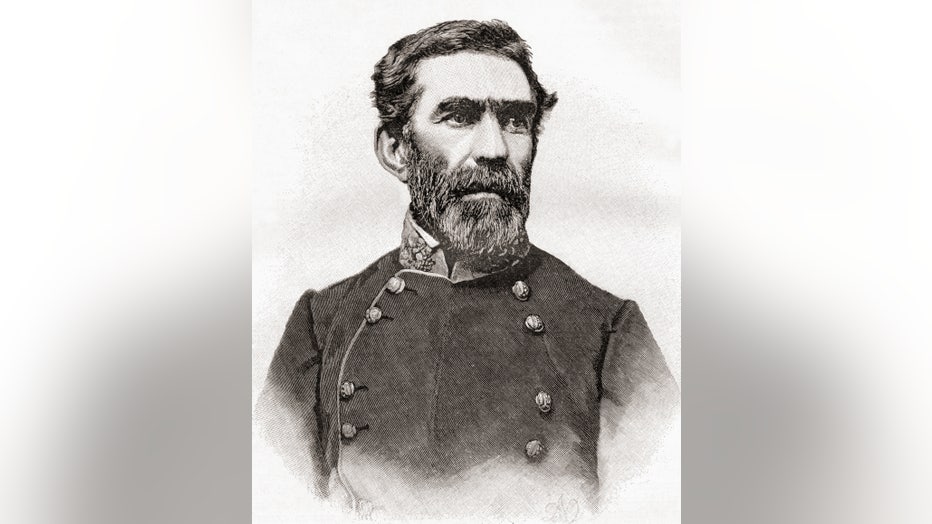 General Braxton Bragg, 1817 –1876. Career United States Army officer, and general in the Confederate States Army He was a principal commander in the Western Theater of the American Civil War. From The Century Magazine, published 1887. (Photo by: Univ

The City Council heard Monday from people both supporting and opposing a name change. The council was to debate whether to put the renaming issue to voters through a ballot measure in November but decided at last against pressing forward with it.

Instead, Mayor Will Lee designated two council members to report on guidelines for creating a commission of residents to examine the issue of a name change. No deadline for the guidelines was given.

Fort Bragg was founded in 1857 before the U.S. Civil War by Lt. Horatio G. Gibson, who established a military post to keep control of the Mendocino Indian Reservation. He named it for Bragg, who was his former commanding officer.

The issue of renaming the city of 7,000 people, a popular tourist destination and former lumber town about 165 miles (264 kilometers) north of San Francisco, cropped up five years ago after a white supremacist killed nine Black churchgoers in Charleston, South Carolina. City leaders declined to do so at the time.

Supporters of a name change say the city should not honor a racist who fought for the South and had nothing to do with Northern California. Opponents say a name change would be costly, time-consuming and unnecessary. They say elected leaders should not succumb to political pressure at a tumultuous time.

“I don’t go home and worship a statue of Braxton Bragg. This is home to me,” said 34-year-old Ryan Bushnell. “It means more than a name to me, and I know it does to a lot of people.”

Protests have broken out across the country after George Floyd was killed by police in Minneapolis last month. Monuments honoring Confederate leaders, former slave owners and other historic figures associated with colonization and brutalization of minorities have come down, either by force or government order.

In San Francisco’s Golden Gate Park, protesters took down a statue of Catholic missionary Junipero Serra and a statue of Francis Scott Key, who wrote the “Star Spangled Banner” and also owned slaves. San Francisco city workers removed a statue of Christopher Columbus from its pedestal at Coit Tower.

Bragg also has one of the largest military installations in the world named after him: Fort Bragg in North Carolina. There is support to rename military bases and equipment of Confederate names and other symbols.

Fort Bragg city staff said in a memo to the council that they could also choose to re-dedicate the city to different Braggs: Britain’s William Henry Bragg and William Lawrence Bragg, a father-son team who won the 1915 Nobel Prize in physics.