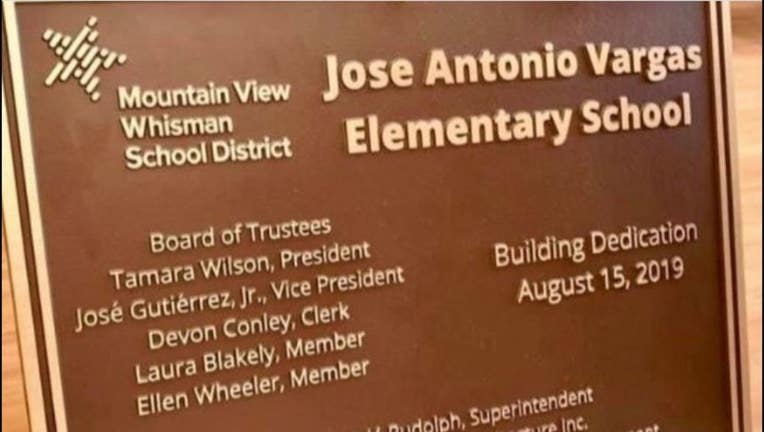 MOUNTAIN VIEW, Calif. (KTVU) - When children attend a new elementary school in Mountain View, Calif. on Monday after a long summer vacation, they will be gracing a campus that is believed to be the first in the United States named after an undocumented immigrant.

On Thursday, students, parents, teachers and community members gathered at the newly built Jose Antonio Vargas Elementary School on N. Whisman Road, to dedicate the campus to the Pulitzer Prize-winning author who was born in the Philippines and is now a well-known immigration rights activist. The Mountain View Whisman School District has about 5,000 students, about 25 percent who are English learners and 35 percent who get free or reduced lunches at school.

"When we talked with the community last spring about the traits they'd like to see in a school namesake, 'inclusive' and 'diverse' were the themes," district spokeswoman Shelly Hausman said. "Several names were considered in the process and the board approved his in June 2018."

Huge silver mylar balloons that spelled V-A-R-G-A-S adorned the stage of the newest school in the district last week as children laughed when the author recalled stories about his first day of school in Mountain View. "It was exciting and scary," he told the kids.

Naming a school after him is the “biggest honor of my life,” Vargas described in a series of tweets about how difficult it was to write a “kid-friendly” speech about his journey.

His journey includes coming to Mountain View when he was 12 when he didn’t have the proper authorization to live in the U.S. permanently, and he stayed with his grandparents who were naturalized citizens. He attended Crittendon Middle School and Mountain View High School.

He didn’t learn of his immigration status until 1997 when he tried to get a California driver’s license and couldn’t because his documents were fraudulent. At first, he kept his immigration status a secret. It was then that his high school teacher introduced him to journalism and he got a job as an intern at the Mountain View Voice.

He later became a copy boy for the San Francisco Chronicle, where he later held a job as a reporter, after graduating from San Francisco State University, where he earned a degree in political science and Black studies.

Vargas’ journey also led him to work for The Washington Post, where he was on a team that won the Pulitzer Prize for Breaking News Reporting in 2008 for coverage of the Virginia Tech shooting. And he also reported for the Philadelphia Daily News and Huffington Post.

In June 2011, Vargas wrote an explosive essay in The New York Times Magazine, revealing that he was an undocumented immigrant in an effort to promote dialogue about the immigration system in the U.S. and to advocate for the DREAM Act, which would provide children in similar circumstances with a path to citizenship.

A year later, a day after the publication of his Time cover story about his continued uncertainty regarding his immigration status, the Obama administration announced it was halting the deportation of undocumented immigrants age 30 and under, who would be eligible for the DREAM Act.

Vargas, who had just turned 31, did not qualify.

Vargas is also the founder of Define American, a nonprofit organization intended to open up dialogue about the criteria people use to determine who is an American.

Last September, he published a memoir, "Dear America: Notes of an Undocumented Citizen."

That book is pinned to the top of his Twitter feed, with a note to his followers: "I wrote #DearAmerica thinking I would leave the U.S., where I’ve lived for 25 years. But after I finished writing the book—the best therapy I could have given myself—I’ve decided to stay. And build a home. Here in the SF Bay Area, where I grew up."