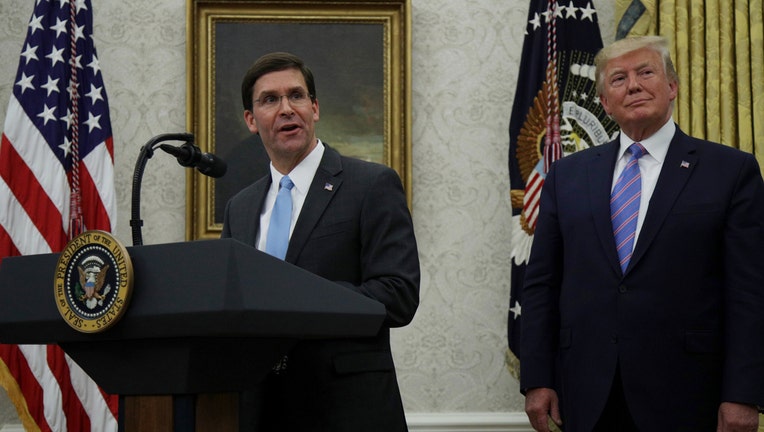 WASHINGTON, DC - JULY 23: Mark Esper (L) speaks during his swearing in ceremony to be the new U.S. Secretary of Defense as U.S. President Donald Trump (R) looks on July 23, 2019 in the Oval Office of the White House in Washington, DC. Esper succeed J

Esper told reporters at the Pentagon that Trump’s verbal order was the reason Esper announced Sunday that Chief Petty Officer Edward Gallagher would be allowed to retire with his Trident Pin, retaining his status as a SEAL.

Last week Trump had tweeted that he wanted Gallagher to be allowed to retire as a SEAL, but Esper’s comments Monday revealed that Trump had given the defense secretary a direct order to make this happen.

Gallagher was acquitted of murder in the stabbing death of an Islamic State militant captive but convicted of posing with the corpse while in Iraq in 2017.

In his remarks, Esper also accused Navy Secretary Richard Spencer of secretly offering to the White House to rig the Navy disciplinary process to ensure the Gallagher not lose his Trident.

Esper fired Spencer on Sunday, saying he has lost trust in him. Spencer has not responded to requests for comment on Esper’s accusation.

In announcing Sunday that he had dismissed Spencer, Esper said he acted after learning of Spencer’s secret plan to guarantee the outcome of a Navy SEAL peer-review board that was scheduled to convene Dec. 2 with the goal of recommending whether Gallagher should be allowed to retain his Trident.

Spencer had “proposed a deal whereby if the president allowed the Navy to handle the case, he would guarantee that Eddie Gallagher would be restored to rank, allowed to retain his Trident and permitted to retire,” Esper said.

This was “completely contrary” to what Esper and the rest of the Pentagon leadership had agreed to and contrary to Spencer’s public position that the Navy disciplinary process should be allowed to play out with no interference.

Esper said he was “flabbergasted” when he learned at the White House on Friday that Spencer had gone behind his back to propose the secret deal.

The White House did not immediately respond to a request for comment.