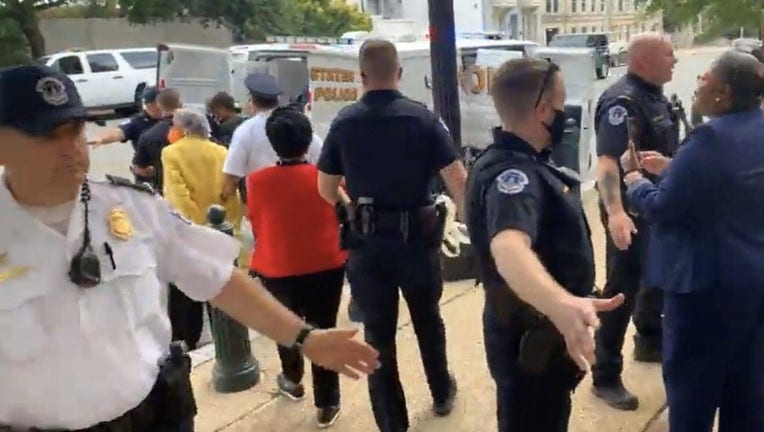 HOUSTON - Congresswoman Sheila Jackson Lee was arrested Thursday during a protest in Washington.

According to a press release by the Harris County Democratic Party (HCDP), Lee, who represents the state's 18th district, was one of many demonstrators with the Black Women Leaders and Allies group marching to the Senate Hart Building in protest of the U.S. Senate's "nonaction on voting rights."

Details are limited as to why she was arrested, however, Lee says "she was ‘engaging in civil disobedience in the spirit of John Lewis."

"Congresswoman Lee understands we are at a pivotal moment in the history of our nation, where our sacred right to vote is under grave threat. She recognizes that we all must take action to protect this right.

"The marchers today —  and everyone participating in the Black Women Leaders and Allies Voting Rights day of action — are sending a message to Americans: Our elected officials have the power to protect our vote and our voice. They are in a position right now to support and defend our democracy, and they must act now."

In a press release issued on behalf of Congresswoman Lee, her team argues she "stood up for our democracy and our inalienable right to vote today.

"The Congresswoman stepped onto the path many early civil rights heroes have ventured," the statement continued. "The Congresswoman marched and was arrested for demanding the Senate take action on the voting rights bills languishing on their watch. The march for justice is not easy, nor is it safe. Congresswoman Sheila Jackson Lee took a stand for democracy today."

The congresswoman has since been released from police custody.