Dr. Gabe Kelen, director of the Department of Emergency Medicine at Johns Hopkins, explains how flattening the curve doesn’t necessarily mean a sooner end to the outbreak.

BALTIMORE - As the United States reached the grim milestone this week of 100,000 deaths from COVID-19, health experts say the coronavirus outbreak isn’t nearly over.

More than 5.8 million people around the world had been confirmed infected by the virus, and more than 340,000 deaths had been recorded globally as of May 29, according to a tally kept by Johns Hopkins University. Experts say the number of infections is a best estimate and most assuredly an undercount.

The impact of the virus on lives lost, on the economy and on society as a whole has led many to wonder how long it will take as a population to get out of this current outbreak. When will things return to some sense of “normalcy?”

According to Dr. Gabe Kelen, director of the Department of Emergency Medicine at Johns Hopkins, not as soon as we’d hope.

“We are nowhere near the peak. And there are several peaks. We just hit the first one, generally, and we’re sliding a bit downward,” Kelen, who specializes in emerging infections, explained.

“We just saw a little mini peak now, with maybe 1 to 12, 13, 15% of the population in some sections infected. So it’s inevitable that unless a vaccine comes in, there’s still a huge swath of people remaining to be infected before this thing peters out. So a second wave is virtually inevitable, possibly even a third and a fourth,” Kelen said.

“At the same time, it’s different in all parts of the country. In New York, it’s gone down a bit. They’re wondering how come there are 50,000 new infections in the last two weeks. I mean, that’s a large number even though things are going down. Whereas in the more spatially populated areas, suddenly things are going up in places that have opened up a little bit.”

As the virus began making its way around the world earlier this year, the U.S and other countries began implementing major mitigation strategies, such as social distancing guidelines and stay-at-home orders, in order to slow the spread of COVID-19. But “flattening the curve” doesn’t mean a sooner end to the outbreak.

“You often hear about ‘let’s flatten the curve,’ but the flattening the curve does not decrease the total number of infections. The reason to flatten the curve is that the health care system becomes overwhelmed and you have preventable deaths,” Kelen said.

The Centers for Disease Control and Prevention said this week that the number of U.S. coronavirus deaths is now projected to exceed 115,000 by June 20. And as crowds of unmasked Americans swarm reopened beaches, and Las Vegas casinos and Walt Disney World make plans to reopen this summer, officials have predicted a resurgence by fall. 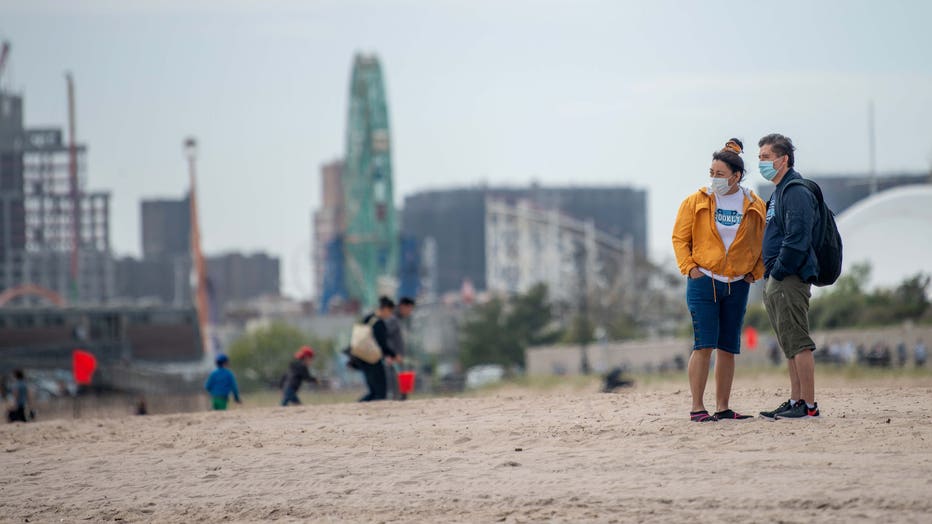 People wearing masks stand on the beach at Coney Island on Memorial Day, May 25, 2020 in New York City. (Photo by Alexi Rosenfeld/Getty Images)

About a dozen COVID-19 vaccine candidates are in early stages of testing or poised to begin worldwide. But experts say even if everything goes perfectly, 12 to 18 months to develop a vaccine would set a speed record.

RELATED: Poll: Half of Americans would get a COVID-19 vaccine

Short of an intervention, such as a successful vaccine, Kelen said we need to reach a threshold known as herd immunity to see an end to the outbreak. This means that once enough people become immune to the novel coronavirus, it can't spread as easily throughout the population.

“One way or another, you have to reach herd immunity in order to have this virus peter out,” said Kelen. “By most scientists’ estimates, that means about 60% of the population needs to become infected. Might be a little less, might be a little more, depending on what the virus does.”

RELATED: American virus deaths at 100,000: What does a number mean?

Several new studies across the world aiming to quantify how many people have been infected with the virus have found the percentage of people to be in the single digits, according to a report from the New York Times.

A survey released by the New York governor’s office found that roughly 20% of residents in New York City, one of the worst-hit cities in the world, had been infected by the virus as of early May.

Kelen warned of the implications of easing up on mitigation strategies, such as wearing a mask and stay-at-home orders, but also pointed out the difficulty in keeping the restrictions in place.

“I don’t know anyone who hasn’t in their models predicted another peak that is likely to be bigger unless we really keep these mitigation strategies in, which are very difficult to do,” Kelen said. “It’s harming the economy. You have to consider other health effects of people who are sick, out of work. The media has reported on depression, suicide, alcoholism, violence, those kinds of things that happen when you lock down.”

Amid fears of a resurgence of COVID-19 later this year, there is still flu season to worry about — which Kelen said leaves cause for concern.

“There’s influenza A and B and other viral pathogens, and we could have the perfect storm when all of these coincide in November or December. We’re almost always overwhelmed during flu season anyway,” he said.

Amid fears of what a second wave of the novel coronavirus could look like, Kelen said there is a reason to be hopeful. Nursing homes, prisons and other congregate types of places are now better equipped in terms of infection control procedures, testing and isolating. He added that the elderly and those with pre-existing conditions are also more likely to self-isolate and be more cautious moving forward.

“So even if we see a peak, a second peak maybe twice as big as what we experienced, hopefully from a health care perspective there might not be as many admissions and deaths and ICU, and so forth — at least proportionately.”

Kelen, who first began his career at Johns Hopkins in 1982, became world renowned for his work in developing novel methods to study HIV and other blood-borne pathogens. He now oversees disaster management for Johns Hopkins University and its health system, ensuring that everything functions smoothly.

“These last 80 days have been about as busy as ever. Although I must say it has been one of the most not-fun 80 consecutive days of my life. It’s just been very intense in every possible way.”