Myon Burrell has been released from the prison in Stillwater prison just hours after the Minnesota Board of Pardons voted to commute his life sentence to a 20-year sentence.

MINNEAPOLIS (FOX 9) - Myon Burrell, who was sentenced to life in prison as a teenager for the 2002 murder of a Minneapolis girl, has been released from prison, following a vote from the Minnesota Board of Pardons.

The Board approved to commute his life sentence to a 20-year sentence and for Burrell to serve the rest of the time on immediate supervised release. Shortly after the hearing, the Department of Corrections issued an internal memo to process his release. He was released shortly before 7 p.m. Tuesday night. Dozens of supporters greeted him as he left the prison.

Burrell released from prison after board commutes life sentence

Myon Burrell, who was sentenced to life in prison as a teenager for the 2002 murder of a Minneapolis girl, has been released from prison, following a vote from the Minnesota Board of Pardons.

"I can’t even explain my gratitude to all my supporters. I love ya’all take care. There’s too much injustice going on," said Burrell after his release.

Burrell was 17 when he was given a life sentence for the 2002 death of 11-year-old Tyesha Edwards.

Tuesday Burrell pleaded his case before the board, which includes Gov. Tim Walz, Attorney General Keith Ellison and Minnesota Supreme Court Chief Justice Lorie Gildea. The board needed a unanimous vote to grant a pardon. Gildea recused herself from Burrell's case, so Burrell only needed two votes to get a pardon.

Myon Burrell was released from Minnesota prison Tuesday after the Board of Pardons approved a 20 year commutation.

At his hearing Burrell, said he did not wish to "minimize the loss of Tyesha Edwards," but rather prove he deserved the opportunity to be released.

"Despite me being incarcerated for a crime I didn’t commit, I tried to make the best of my situation," said Burrell. "I started going and extracted some medicine up out of the poison. The trials and tribulations I was going through, I tried to get something out of it."

Myon Burrell gives opening statement before Board of Pardons

Myon Burrell was convicted in 2002. Tuesday, he went before the Board of Pardons to ask for his freedom.

Ellison and Walz both shared their sympathies for Tyesha's family, members of which have voiced against Burrell's release. The governor and attorney general said the juvenile justice system needs reform.

"Your age at the time of your conviction is extremely persuasive to me in terms of clemency and a commutation," Ellison said. "The Supreme Court has said it is unconstitutional to give a juvenile a life sentence. And if 45 years isn’t a life sentence, I don’t know what is."

Myon Burrell Board of Pardons vote

Myon Burell granted a commutation an immediate release from prison.

"We should savor this moment and we should prepare to keep fighting for ultimate and absolute justice for myon and also for Tyesha Edwards," said Elizer Darris of Minnesota's ACLU chapter.

Edwards was struck and killed by a stray bullet that went through the side of her house while she was doing homework at the kitchen table. An investigation by Minneapolis police concluded Burrell fired a shot from across the street at a rival gang member, Timothy Oliver, who was near the house where Edwards was killed.

U.S. Sen. Amy Klobuchar, the Hennepin County Attorney at the time, charged Burrell with the murder of Edwards and the attempted murder of Oliver. A jury found him guilty on both charges. 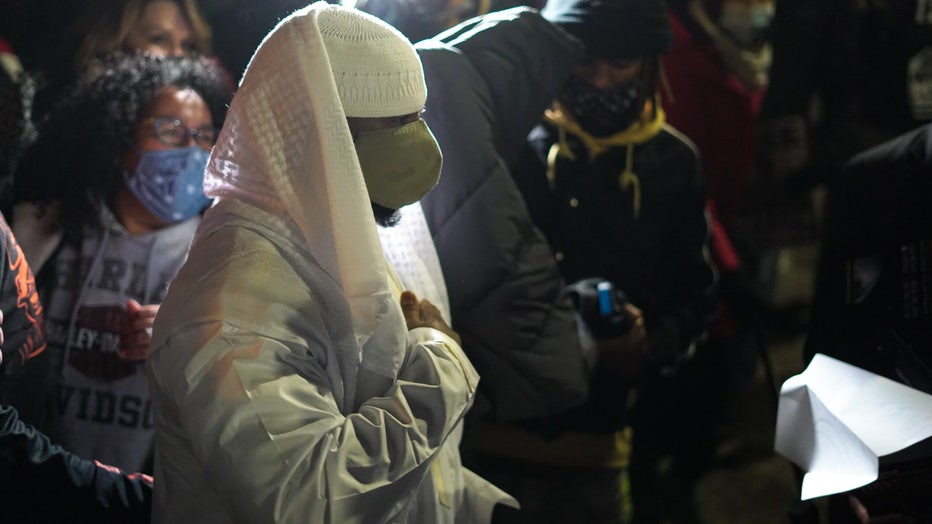 Myon Burrell addressed a crowd of supporters after he was released from Stillwater prison following a vote by the Minnesota Board of Pardons.

The case made headlines while Klobuchar was running for the Democratic presidential nomination earlier this year after an Associated Press investigation raised questions about whether Burrell may have been wrongfully convicted.

Klobuchar released the following statement Tuesday, calling the Board of Pardon's decision "right and just".

“This was the right and just decision, and I thank the Pardon Board for their work. Along with others, I had asked for the independent investigation of this case, and as I said when the report was first released, the sentence deserved immediate review. That happened today. I also urge the Minnesota Conviction Review Unit to continue the re-investigation of the facts of the case."

Last week, a national panel of legal experts recommended Burrell’s release, saying there were serious flaws in the police investigation.