Police around the southern English coastal town of Bournemouth urged people to stay away as thousands defied social distancing guidelines and flocked to local beaches on what is the U.K.’s hottest day of the year so far. (Credit: Peter Ryan via Storyful)

LONDON (AP) - Police around the southern English coastal town of Bournemouth urged people to stay away Thursday as thousands defied coronavirus social distancing rules and flocked to local beaches on what is the U.K.'s hottest day of the year so far.

A “major incident” has been declared for the largely rural area that can only be navigated in most places by car on narrow lanes. This gives additional powers to local authorities and emergency services to tackle the issue.

Bournemouth, Christchurch and Poole council said services were “completely overstretched” as people sought the sanctuary of the seaside on a day meteorologists confirmed as the hottest of 2020. The mercury hit 33.3 C (around 92 F) at London's Heathrow Airport.

Extra police patrols have been brought in and security is in place to protect waste collectors who the council said faced “widespread abuse and intimidation” as they emptied overflowing bins. Roads, which were gridlocked into the early hours, now have signs telling people the area is full, according to the council. 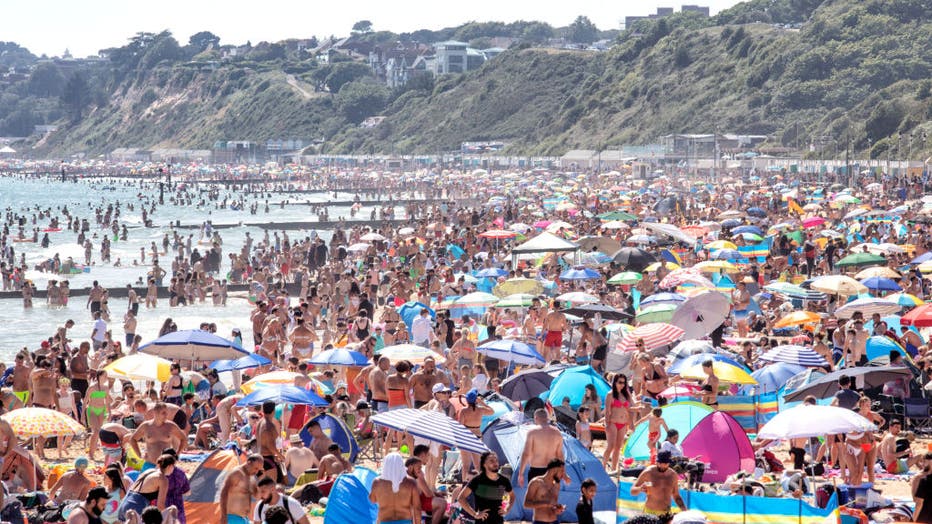 The UK is experiencing a summer heatwave, with temperatures in many parts of the country expected to rise above 30C and weather warnings in place for thunderstorms at the end of the week. (Photo by Chris Gorman/Getty Images)

Council leader Vikki Slade said she was “absolutely appalled” at the scenes witnessed on the beaches — particularly at Bournemouth and Sandbanks over the past day or two.

“The irresponsible behaviour and actions of so many people is just shocking and our services are stretched to the absolute hilt trying to keep everyone safe,” she said. “We have had no choice now but to declare a major incident and initiate an emergency response.”

Earlier this week, Prime Minister Boris Johnson gave notice that a number of the lockdown restrictions will be eased from July 4, including allowing pubs and restaurants to open their doors. He also effectively announced that the two-meter (6.5-foot) social distancing rule will be reduced to a meter (around three feet) from that date, a move that is largely aimed at bolstering businesses.

The relaxation has met with a lot of criticism, not least because the U.K. is still recording relatively high new coronavirus infections and deaths. On Thursday, the government said another 149 people who tested positive for the virus had died, taking the total to 43,230, by far the highest in Europe.

“Clearly we are still in a public health crisis and such a significant volume of people heading to one area places a further strain on emergency services resources," said Dorset Police’s Sam de Reya.