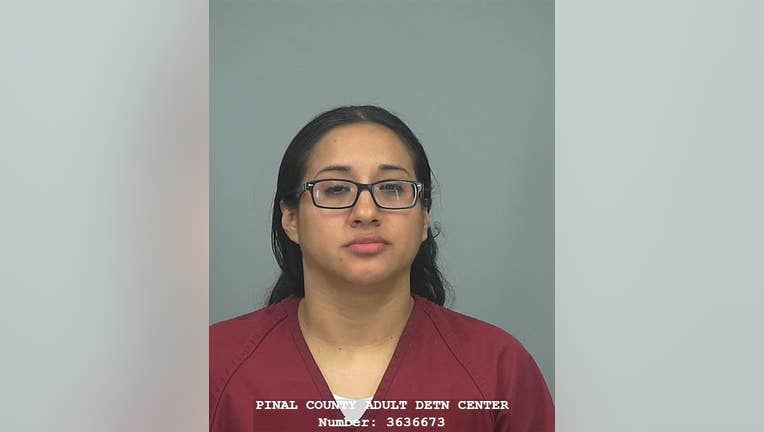 PINAL COUNTY, Ariz. - A Pinal County woman is accused of hurting an 8-year-old child so badly that he was hospitalized for several weeks, officials said on Nov. 12.

The Pinal County Sheriff's Office says the case began when the mother brought her son to a local hospital, where she claimed he had injured himself after falling off a skateboard in early September.

Doctors reportedly saw that the injuries were consistent with that of abuse and contacted authorities. The boy had multiple broken bones and internal organ injuries so severe that he was flown to Phoenix for emergency surgery in critical condition.

Detectives say the boy had likely been injured for one or two days before he was taken to a hospital for treatment. He spent several weeks in the hospital recovering.

"At that time, the child's mother's partner, 29-year-old Claudia Genis, stopped cooperating with the investigation. Detectives found evidence in her phone she was attempting to fabricate a story for law enforcement," according to the PCSO report. "The child was placed in DCS custody. The child later told investigators it was Genis who hurt him. He disclosed the abuse began when COVID started and he had to stay home from school."

Claudia Genis surrendered on Nov. 10 and was booked into Pinal County Jail.

"PCSO detectives stated this is likely one of the worst cases of child abuse they have investigated in their careers," the sheriff's office wrote in a statement.

“This case is truly heartbreaking, the fact someone could do this to an innocent child," said Sheriff Mark Lamb. "But I am thankful our Detectives were able to get to the bottom of it, and free this child from his abuser."

PCSO says the mother continues to cooperate with them and the investigation is ongoing.