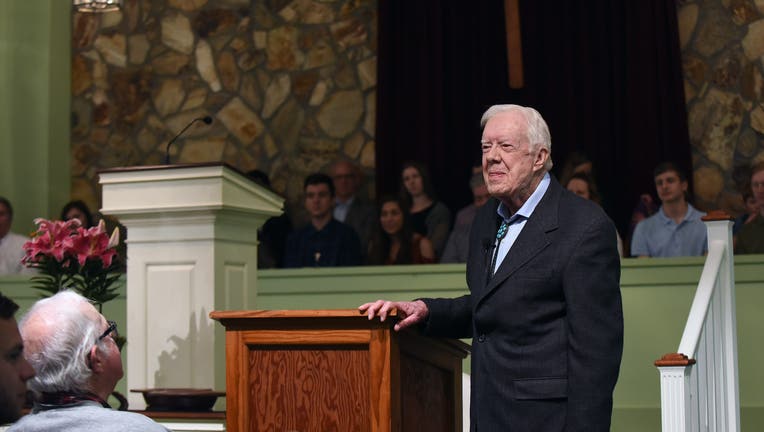 Former U.S. President Jimmy Carter speaks to the congregation at Maranatha Baptist Church before teaching Sunday school in his hometown of Plains, Georgia on April 28, 2019. Carter, 94, has taught Sunday school at the church on a regular basis since

ATLANTA - A spokeswoman says former U.S. President Jimmy Carter has been admitted to a south Georgia hospital for treatment of a urinary tract infection.

Deanna Congileo, a spokeswoman for The Carter Center, said Monday afternoon in a statement that the 95-year-old former president was admitted to Phoebe Sumter Medical Center in Americus over the weekend. She said Carter "is feeling better and looks forward to returning home soon.

Carter was released a few days before Thanksgiving after successful brain surgery earlier in the month at Emory University Hospital. The former president underwent a procedure to relieve pressure on his brain from a subdural hematoma, which was caused by his recent falls.

He spent the weekend in Plains, Georgia celebrating the holiday. No word on if the former president, who is an avid wild turkey hunter, bagged his own bird for his family's Thanksgiving feast.