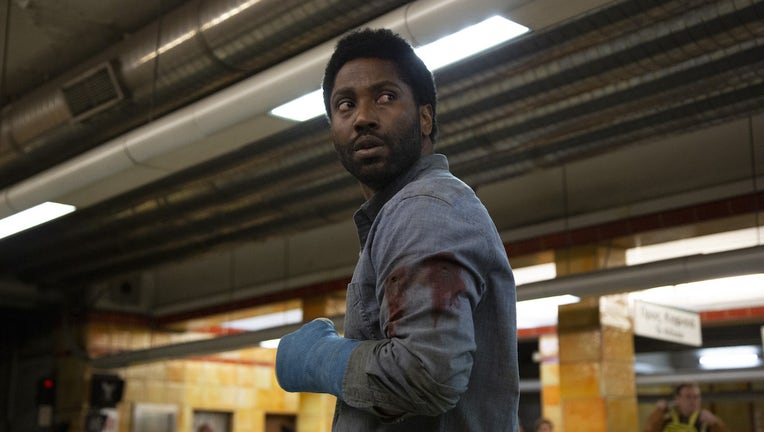 LOS ANGELES - It’s every tourist's worst nightmare: You’re traveling through rural Greece with your girlfriend and you get into a horrible car accident. The next thing you know, you’re embroiled in a government conspiracy, on the run from the corrupt officials trying to kill you.

That’s the idea behind Netflix’s latest action/adventure film "Beckett." Unfortunately, it's a thriller that fails to deliver on the aforementioned thrills, misuses a stellar cast and wastes the potential for an exciting franchise. By the end, it leaves more questions than answers, and its greatest success comes in proving that good actors can't make up for bad writing.

On paper, all the ingredients for a memorable action flick are present and accounted for: It’s anchored by John David Washington, whose star is fast on the rise. He’s joined by Boyd Holbrook, known for his roles in notable action projects like "Logan," and "Narcos," Oscar winner Alicia Vikander (the once and future Lara Croft) and "Phantom Thread" standout Vicky Krieps.

Together with up-and-coming Italian director Ferdinando Cito Filomarino, who makes his English-language feature debut, all the pieces needed to create a top-notch espionage drama in the vein of "The Bourne Identity" or "The Manchurian Candidate" are present in "Beckett."

Yet the nearly two-hour-long roller coaster ride is more like the bad vacation on which the storyline centers. By the time the credits roll, viewers and the main character alike may just beg to return home safely.

Luckily for the audience, they’ll be watching the film from the comfort of their own home, as "Beckett" arrives at a time in which films might not be as enjoyable if viewed in a packed movie theater.

About "Beckett": more confusing than thrilling

The action begins thanks to one dangerous mistake: Beckett (Washington) crashes his car after falling asleep at the wheel while driving through the Greek countryside with his girlfriend April (Vikander).

From there, the film navigates hastily into a world of political corruption, wilderness survival and vile government agencies out for blood, all of which the main character is far from qualified to survive. Washington’s character gets beat down to the point of hilarity. It is never once believable. It’s like watching a James Bond film — except replace Bond with Dwight from "The Office."

Washington’s skills as a performer certainly help make the series of unnecessarily drawn-out action sequences and the struggling plot more tolerable. As an actor doing the best with what he has, his place in Hollywood is unlikely to be questioned.

But he can only do so much, and the film builds to one giant reveal that never arrives. The writers may have hoped to prove some deeper point about the consequences that come from one simple mistake that could have been avoided by a second's worth of due diligence. If so, they failed. If there’s any lesson to be learned from this film, it’s that it only takes one single action to avoid complete disaster: not pressing play.

Should you see "Beckett" or skip it?

If you like films that answer all your questions in 20 minutes — or answer them at all — then "Beckett" isn’t the one for you.

Washington cemented his role in the world of action-packed thrillers with Christopher Nolan’s big-budget mind-fart, "Tenet." Similar to the role he played in "Tenet," Washington embodies another flustered protagonist trying to wrap his head around the situation he finds himself in, one action-packed sequence at a time.

And as with "Tenet," audiences watching Washington’s character may be left perpetually confused until the big finish, which is more about explosive disarray than providing a moment of actual clarity.

It’s not all bad. The action sequences do a good job showing the character’s mediocre ability to defend himself in life-threatening situations. Washington clearly communicates that Beckett is a guy in the wrong place at the wrong time; he clearly just can’t catch a break. Some of the action scenes are so exaggerated, it almost feels like a comedy at times.

Beckett may be the protagonist, but Washington is the unlikely hero of the film, doing his best to save the day from a seemingly disastrous plot-line.

As the film approaches its conclusion, Beckett reflects, "I should have died." It’s likely the only thing audiences might agree with after watching this movie.

"Beckett" may not answer any of your questions, but these free thrillers on Tubi will

Fallacy (2013): "David is a family man and aspiring lawyer with a secret: he moonlights as a sex worker and he’s about to get entangled in a dangerous political game."

Mesrine: Killer Instinct (2010): "Beloved son and French veteran of the Algerian War, Jacques Mesrine answers the call of easy money and crime before escaping to Canada in the 1960s."

Love and Bullets (1979): "A loner with a grudge against a mob boss jumps at the chance to get even when the FBI sends him to Switzerland to kidnap the gangster’s girlfriend."

About the writer: Austin Williams is a Los Angeles-based journalist. He is the executive producer for KTTV's tech podcast, Silicon Sandbox, and is a digital content creator for FOX TV Stations. Find him on Twitter at @Auswil91.