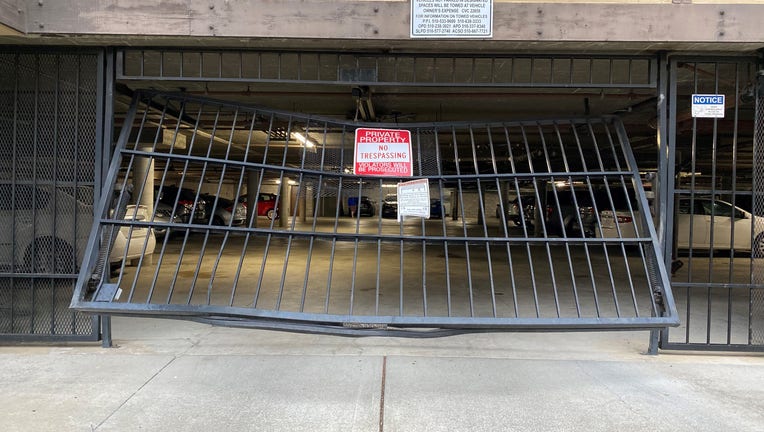 SAN LEANDRO, Calif. - A San Leandro police officer suffered a minor leg injury Tuesday morning after police said suspects who had stolen some catalytic converters were trying to get away.

In a news release, Lt. Ali Khan said that just before 6 p.m., police responded to the 1100 block of Carpentier Street regarding a catalytic converter theft in progress.

When they got there, police said they learned that the suspect and the getaway vehicle were trapped inside the complex's gated parking garage.

Officers deployed stop sticks at the exit point of the complex to try to stop the suspects from getting away. But when they were backing up, the suspect driving the car struck the officer in the leg, and then rammed the gate of the complex before taking off, police said.

"The suspects showed total disregard for human life as they hit an officer and rammed the secured gate to escape," said Khan said.

Police chased the driver into Oakland and arrested him. The officer did not require any medical assistance. Police did not say anything about the second suspect.

Then, at 7:40 a.m. San Leandro police responded to another catalytic converter theft in the 300 block of Pershing Drive. Police decided not to pursue this suspect car, however, due to public safety concerns.

Regionally and in San Leandro, there has been an increase in catalytic converter thefts. San Leandro police have seen a 65% increase from 2020. A monthly average comparison to 2019 shows an increase of 431%.

Car owners can protect their catalytic converters by installing after-market guard plates under their vehicles.