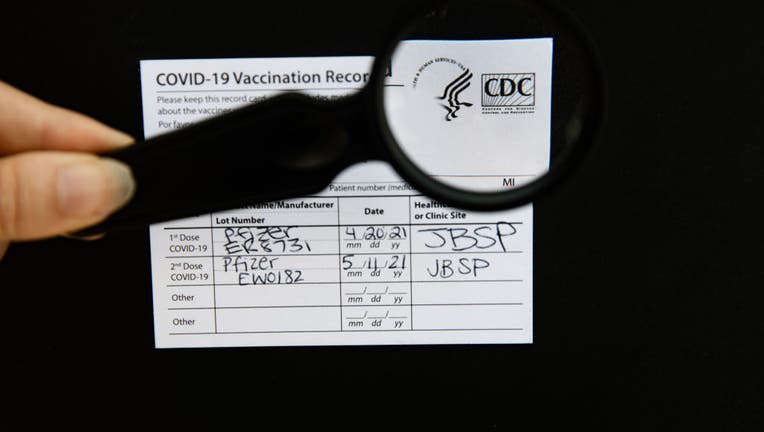 Melville, N.Y.: A photo of a hand using a magnifying glass to check the authenticity of s Covid-19 vaccine card, taken on August 15, 2021. A card that is real will have the CDC logo. (Photo by Raychel Brightman/Newsday RM via Getty Images)

COLUMBIA, S.C. - An employee of a South Carolina skilled nursing and rehabilitation center has pleaded not guilty after she was indicted on federal charges of creating false COVID-19 vaccination cards.

The State newspaper reported that the indictment says Tammy McDonald, a registered nurse and director of nursing at a center in Columbia, lied to agents with the FBI and U.S. Health and Human Services Department when confronted about the false cards.

The rehabilitation center and the person who received the fake cards were not identified in the indictment, which was issued Nov. 23 and unsealed Thursday.

McDonald pleaded not guilty Thursday during an appearance before U.S. Magistrate Judge Shiva Hodges. Assistant U.S. Attorney Mike O’Mara asked for a $25,000 bond for McDonald, and Hodges set it at $10,000.

McDonald’s attorney Jim Griffin told Hodges that McDonald made one or two false vaccination cards to help a relative at the University of South Carolina who has "anti-vaccination beliefs." He said McDonald is vaccinated and received no money for creating the cards.

In recent months, federal and state officials have warned about the possibility of counterfeit cards that look like ones authorized by the U.S. Centers for Disease Control and Prevention.

The authorized cards contain the name and birthdate of the person receiving COVID-19 vaccinations, the name and dose numbers of the vaccines and the dates and locations they were given. Some businesses, governments and groups require employees to show proof of vaccination.