The civil rights leader gave an impassioned eulogy at the June 9 event.

HOUSTON - Rev. Al Sharpton, the prominent civil rights activist, spoke on racial injustice in the U.S. during his eulogy at the funeral of George Floyd. In his impassioned speech, Sharpton criticized the response of major corporations on Floyd’s death and called for equal protections of black and white Americans under the law.

“We are not fighting some disconnected incidence, we are fighting an institutional systemic problem that has been allowed to permeate since we were brought to these shores," Sharpton added.

Sharpton criticized the use of force by the Minneapolis police officer, Derek Chauvin, who had knelt on Floyd’s neck for nearly nine minutes. Floyd would die while gasping for air.

“We have permitted people to become officers of the law that ought to be somewhere else in society,” Sharpton said. “Imagine you pressing down on something [for] eight minutes that’s telling you I can’t breathe, that’s begging for their life and you keep pressing, what kind of mentality is that?”

“This was not just a tragedy, it was a crime,” said Sharpton.

Calling for accountability on Floyd’s death, Sharpton added that “lives like George will not matter until somebody pays the cost for taking their lives.“

“Until we know the price of black life is the same as the price for white life, we are going to keep coming back to these situations over and over again. Either the law will work or it won’t work,” Sharpton said. 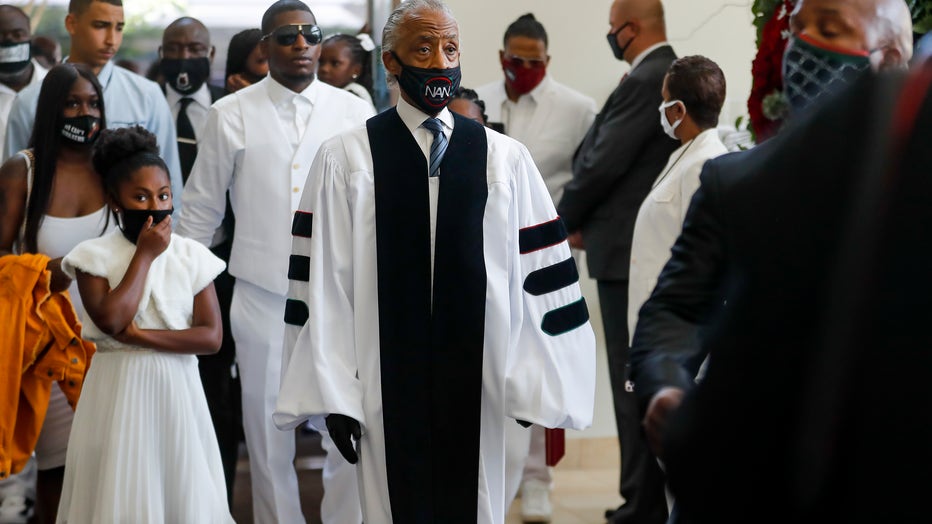 Rev. Al Sharpton enters the The Fountain of Praise church for the private funeral for George Floyd on June 9, 2020 in Houston, Texas.

The services have drawn the families of other black individuals killed by police, names that have become part of the debate over race and justice — among them, Eric Garner, Michael Brown, Ahmaud Arbery and Trayvon Martin.

Sharpton pointed out of Floyd’s family members, saying “they wanted to be here to be part of this because they understand the pain better than anyone, because they’ve gone through the pain.”

One by one, the mother of Trayvon Martin, the mother of Eric Garner, the sister of Botham John, the family of Pamela Turner, Michael Brown’s father and Ahmaud Arbery’s father were introduced by Sharpton, each given a standing ovation by the audience.

“All of these families came to stand with this family because they know better than anyone else the pain they will suffer from the loss that they have gone through,” said Sharpton.

Sharpton also criticized the NFL’s response to the recent protests that have erupted over the death of Floyd. Roger Goodell last week apologized on behalf of the league for not listening to NFL players who had previously spoken out against racial injustice in the country.

“We are listening, I am listening,” Goodell added.

“Don’t apologize, give Collin Kaepernick his job back!” Sharpton declared.

When Colin Kaepernick took a knee during the national anthem to take a stand against police brutality and racial injustice in 2016, he was mostly alone.

Politicians, team owners and fellow players criticized him, fans burned his jersey, and he was booed even at home. Four years later, his protest is widely viewed as prescient. Global opinion has shifted so much that more people are now vilifying those who attack Kaepernick or misrepresent his stance.

“When Collin took a knee he took it for the families in this building,” said Sharpton.

The 65-year-old civil rights activist previously delivered a powerful eulogy during a separate memorial for Floyd in Minneapolis on June 4, which saw many prominent guests in attendance.

Sharpton finished his remarks by announcing a national march scheduled on the anniversary of the March on Washington. Dr. Martin Luther King Jr’s landmark “I Have a Dream” speech will be led by Floyd’s family.

Memorials took place in three cities over the course of six days before a final public viewing on Monday in Houston where Floyd was raised and lived most of his life.

In the past two weeks, amid the furor over Floyd's death, sweeping and previously unthinkable things have taken place: Confederate statues have been toppled, and many cities are debating overhauling, dismantling or cutting funding for police departments. Authorities in some places have barred police from using chokeholds or are otherwise rethinking policies on the use of force.

Floyd, a bouncer who had lost his job because of the coronavirus outbreak, was seized by police after being accused of passing a counterfeit $20 bill at a convenience store.

Four Minneapolis officers were arrested in his death: Derek Chauvin, 44, was charged with second-degree murder. J. Alexander Kueng, Thomas Lane and Tou Thao were charged with aiding and abetting. All four could get up to 40 years in prison.

Some of the mostly peaceful demonstrations that erupted after Floyd’s death were marked by bursts of arson, assaults, vandalism and smash-and-grab raids on businesses, with more than 10,000 people arrested. But protests in recent days have been overwhelmingly peaceful.