Thousands of gun-rights activists rallied peacefully at the Virginia Capitol on Monday under a heavy police presence, protesting plans by the state's Democratic leadership to pass gun-control legislation.

The size of the rally and the expected participation of white supremacists and fringe militia groups raised fears that the state could see a repeat of the violence that exploded in 2017 in Charlottesville. But the rally concluded uneventfully around noon, and attendees spilled into the streets, chanting and waving signs.

A spokesman for the Capitol police said that as of 11 a.m. there had been no reports of arrests or injuries.

The Richmond protesters, who were mostly white and male, came out in the thousands despite the chilly temperature to send a message to legislators, they said.

“The government doesn’t run us, we run the government,” said Kem Regik, a 20-year-old private security officer from northern Virginia who brought a white flag with a picture of a rifle captioned, “Come and take it.”

Democratic Gov. Ralph Northam was a particular focus of the protester's wrath. One poster showed his face superimposed on Adolf Hitler's body. 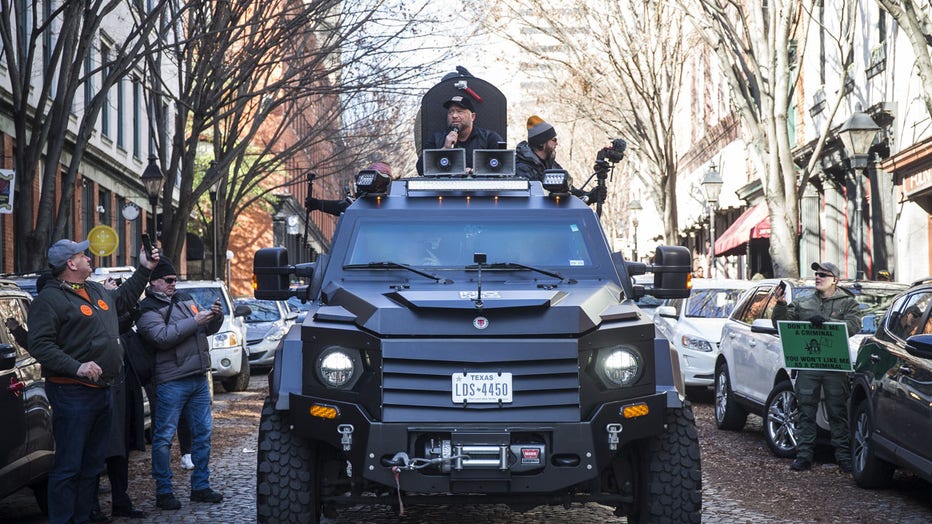 InfoWars host Alex Jones rides in an armored vehicle during a rally organized by The Virginia Citizens Defense League on Capitol Square near the state capitol building on January 20, 2020 in Richmond, Virginia. During elections last year, Virginia Go 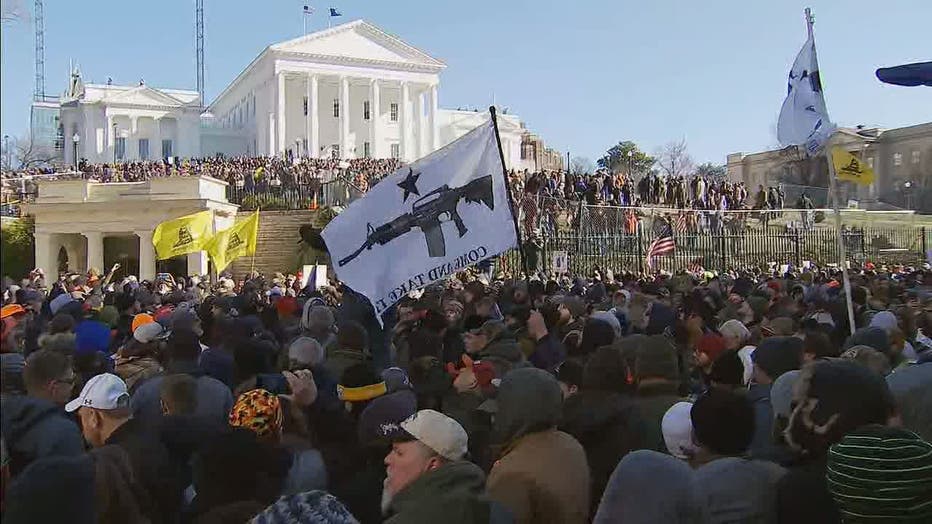 Gun-rights activists and other groups gather in Richmond, Virginia on Monday, January 20.

Many of the protesters wore camouflage. Some waved flags with messages of support for President Donald Trump.

Trump, in turn, tweeted support for their goals.

“The Democrat Party in the Great Commonwealth of Virginia are working hard to take away your 2nd Amendment rights," he tweeted. "This is just the beginning. Don’t let it happen, VOTE REPUBLICAN in 2020!

The Virginia State Police, the Virginia Capitol Police and the Richmond Police had a strong presence, with officers deploying on rooftops, others patrolling in cars and on bicycles.

Authorities were looking to avoid a repeat of the violence that erupted in Charlottesville during one of the largest gatherings of white supremacists and other far-right groups in a decade. Attendees brawled with counterprotesters, and an avowed white supremacist drove his car into a crowd, killing a woman and injuring dozens more. Law enforcement officials faced scathing criticism for what both the white supremacist groups and anti-racism protesters said was a passive response.

In contrast to Charlottesville, there was little sign of any counterprotesters challenging the gun-rights activists.

Gun-rights activists and other groups gather in Richmond, Virginia on Monday, January 20.

Police limited access to Capitol Square to only one entrance, and a long line formed to get into the rally zone. Thousands more stood outside on nearby streets, where the governor's order didn't apply and they were free to carry weapons.

PJ Hudson, 31, a truck driver from Richmond, wore an AR-15 and posed for pictures.

“I love this. This is like the Super Bowl for the Second Amendment right here,” said Hudson, whose shirt said “Black guns matter.”

An RV festooned with Trump material and selling Trump merchandise parked in front of the line to the square, but was booted by a police officer shortly after it parked Monday: “You got two minutes before it's towed. Clock's ticking.”

Advocates also filled the hallways of the building that houses lawmakers’ offices. One couple, Jared and Marie March, traveled from Floyd County, over three hours west of Richmond, to meet with lawmakers.

“Guns are a way of life where we live,” said Marie March, who was concerned about a proposed red-flag law which she said would allow citizens to be stripped of their guns due to “subjective criteria.” A proposal to establish universal background checks amounted to “more Big Brother,” she said. “”We just feel like we need to push government back into their rightful spot.”

Monday's rally was organized by an influential grassroots gun-rights group, the Virginia Citizens Defense League. The group holds a yearly rally at the Capitol, typically a low-key event with a few hundred gun enthusiasts listening to speeches from a handful of ambitious Republican lawmakers. But this year, many more attended. Second Amendment groups have identified the state as a rallying point for the fight against what they see as a national erosion of gun rights.

Erich Pratt, senior vice president of Gun Owners of America, among the speakers, said voters need to replace the Democrats in control of the government in Virginia.

“We need to throw the bums out. We need to clean house in the next election,” he said.

The pushback against proposed new gun restrictions began immediately after Democrats won majorities in both the state Senate and House of Delegates in November. Much of the opposition has focused on a proposed assault weapons ban.

Virginia Democrats are also backing bills limiting handgun purchases to once a month, implementing universal background checks on gun purchases, allowing localities to ban guns in public buildings, parks and other areas, and a red flag bill that would allow authorities to temporarily take guns away from anyone deemed to be dangerous to themselves or others.

Jesse Lambert was dressed in mix of Colonial-era minute-man garb and cargo pants, with a Colt rifle strapped across his back. He said he traveled from Louisiana to show opposition to the gun control bills. He said their efforts would unfairly punish law-abiding gun owners, particularly those who own AR-Style rifles.

“These are your average common people carrying firearms that are in common use,” he said.

The rally coincides with the Martin Luther King Jr. holiday, which is typically a chance for everyday citizens to use a day off work to lobby their legislators. However, the threat of violence largely kept other groups away from the Capitol, including gun control groups that hold an annual vigil for victims of gun violence.

When that event was canceled, students from March for Our Lives, the movement launched after 17 were killed at Marjory Stoneman Douglas High School in Florida in 2018, decided they had to do something.

A group of about 15 college students and one high schooler came to Richmond on Sunday and slept overnight in the offices of two Democratic lawmakers to ensure they could make it into the Capitol area safely. Del. Dan Helmer, who’s sponsoring a bill that would block the National Rifle Association from operating an indoor gun range at its headquarters, and Del. Chris Hurst, a gun control advocate whose TV journalist girlfriend was killed in an on-air shooting in 2015, camped out alongside them.

Virginia’s capital city is bracing for the expected arrival of thousands of gun-rights activists and other groups that have vowed to descend on Richmond to protest Democrats’ plans to pass gun-control legislation.

The students planned to spend the day lobbying.

Michael McCabe, a 17-year-old high school senior from northern Virginia, said he started lobbying at the General Assembly after the Sandy Hook mass shooting, when he was 11 years old.

In an interview in Helmer’s office, McCabe said the students wanted to be a voice for other gun-control advocates.

“Our main goal is not to engage with gun extremists today,” McCabe said. “We are really here to be present in the legislature to make our voices heard.”