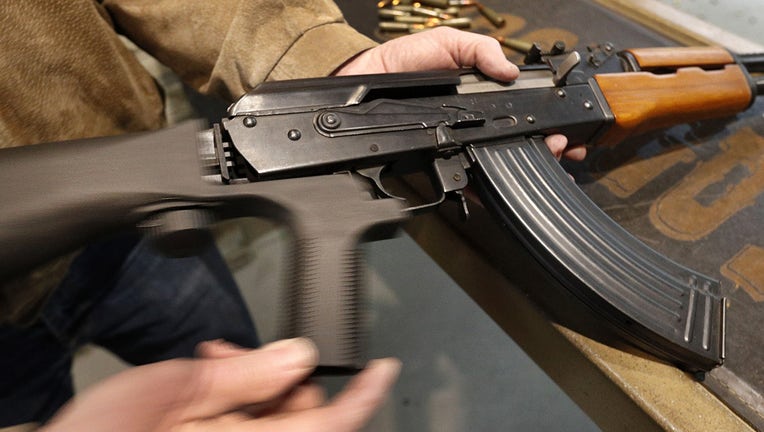 A bump stock is installed on an AK-47 and its movement is demonstrated at Good Guys Gun and Range on February 21, 2018 in Orem, Utah. (Photo by George Frey/Getty Images)

WASHINGTON - The Supreme Court said Monday it won't take up two cases that involved challenges to a ban enacted during the Trump administration on bump stocks, the gun attachments that allow semi-automatic weapons to fire rapidly like machine guns.

The justices' decision not to hear the cases comes on the heels of a decision in June in which the justices by a 6-3 vote expanded gun-possession rights, weakening states' ability to limit the carrying of guns in public.

The cases the justices declined to hear were an appeal from a Utah gun rights advocate and another brought by the gun rights group Gun Owners of America and others. As is typical the justices made no comments in declining to hear the cases and they were among many the court rejected Monday, the first day of the court's new term.

The Trump administration's ban on bump stocks took effect in 2019 and came about as a result of the 2017 mass shooting in Las Vegas. The gunman, a 64-year-old retired postal service worker and high stakes gambler, used assault-style rifles to fire more than 1,000 rounds in 11 minutes into the crowd of 22,000 music fans. Most of the rifles were fitted with bump stock devices and high-capacity magazines. A total of 58 people were killed in the shooting and two died later. More than 850 people were injured.

The high court previously declined a different opportunity to take a case involving the ban.

RELATED: Gun laws across the U.S.