Weekly, additional $300 in Arizona unemployment could end as soon as Sept. 14

Congress is working to fund another stimulus package for the unemployed, but experts say it may not come in time before the benefit ends.

PHOENIX - There could be an abrupt ending to the weekly $300 unemployment boost that went into effect in August to help those who lost their jobs during the COVID-19 pandemic.

Hundreds of thousands of Arizonans rely on the benefit and could see it go away as soon as the week of Sept. 14.

That money may run out as early as next week in Arizona and leave many laid-off workers struggling to pay bills.

“Once the $44 billion is gone, It’s gone. That’s why we’re anticipating this is likely the last week. People get paid for this week on Monday, but there’s probably a good likelihood people won’t get anything after that," says Dave Wells with the Grand Canyon Institute.

Figures released by the Department of Economic Security show more than 130,000 people applied for unemployment benefits for the first time in recent weeks. A total of nearly 400,000 people in Arizona are currently relying on unemployment funds.

Congress is expected to vote on a so-called "Skinny Pandemic" aid bill later this week.

If a new bill is not passed and federal funds do run out next week, unemployed Arizonans will only receive the state benefit of $243 a week.

Jobless advocates do not foresee the state stepping in to replenish the pandemic unemployment fund.

“Governor Ducey already had the option to make it a $400 supplement and he declined. He’s made it clear his priority is to make sure the unemployment trust fund is as healthy as possible as opposed to increasing benefits for anybody in Arizona," Wells says.

Congress could vote on and approve a new pandemic aid package as early as Sept. 10. 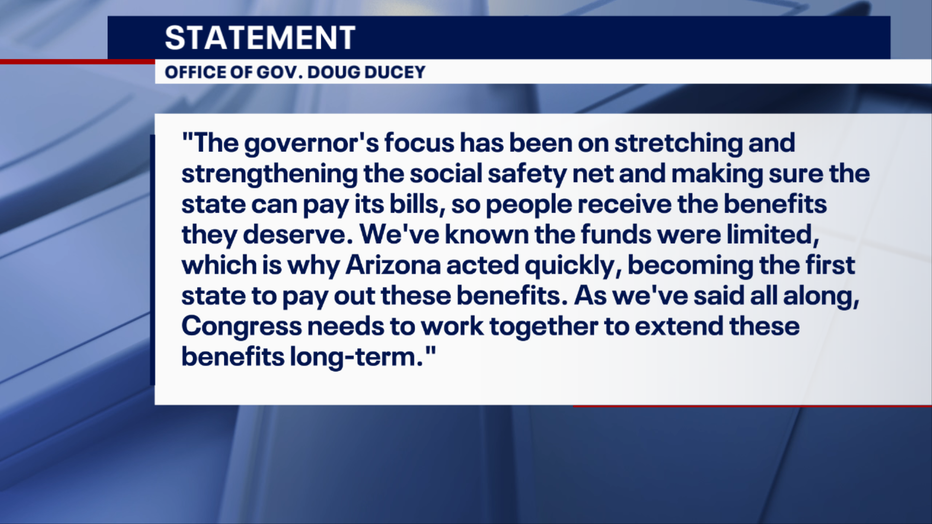