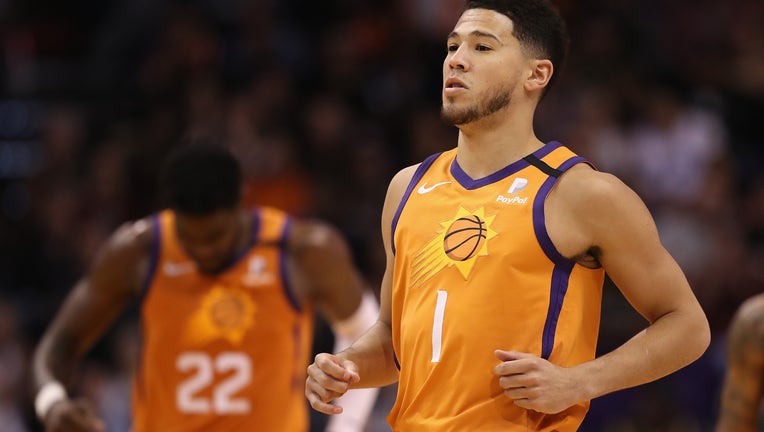 PHOENIX, ARIZONA - FEBRUARY 07: Devin Booker #1 of the Phoenix Suns during the first half of the NBA game against the Houston Rockets at Talking Stick Resort Arena on February 07, 2020 in Phoenix, Arizona. (Photo by Christian Petersen/Getty Images)

The Phoenix guard - who felt he was snubbed by voters and coaches when he didn't make the original list for Sunday's game in Chicago - was tabbed Thursday as the player who will replace injured Portland guard Damian Lillard in the game.

Booker was chosen by Commissioner Adam Silver, who makes the final call on injury replacements to the All-Star rosters. By NBA rule, the replacement player has to come from the same conference as the injured player.

Lillard injured his groin on Wednesday night and said he would not be able to play in either the game or Saturday night's 3-point competition.

“Hopefully somebody who should have been there and didn't make it ... hopefully, Devin Booker or somebody like that will get the spot," Lillard said Wednesday night.

The NBA agreed. Booker will play for Team LeBron - the team selected by LeBron James, one of the captains alongside Milwaukee's Giannis Antetokounmpo - on Sunday night, and also take Lillard's spot in the 3-point contest on Saturday.

Booker is 10th in the NBA in scoring this season, averaging 26.4 points per game. He and Washington's Bradley Beal were, until Thursday morning, the only two scorers in the league's top 10 to not be picked for the All-Star team.

The Suns took their frustration over Booker not being picked as a reserve public earlier this month, after he didn't pick up enough support from the league's head coaches. Fans, players and media voting is used in the formula to choose the All-Star starters; the task of choosing the reserves is solely on the coaches.

“I’ve played with and against multiple All-Stars in this league and Devin Booker is undoubtedly an NBA All-Star," Suns general manager James Jones said when Booker was originally snubbed.

In the end, Jones was right.

Booker becomes Phoenix's first All-Star since Steve Nash in the 2011-12 season. Booker is shooting a career-best 49.6% from the field and another career-best from the foul line this season, 92%.

Although this is his first All-Star Game, Booker has been part of All-Star weekend in each of his five NBA seasons. He has been in the 3-point contest three other times, winning the title in 2018 and also competing in 2016 and 2019. He was a finalist in that event as a 19-year-old in 2016, alongside Golden State's sharpshooting duo of Klay Thompson and Stephen Curry.

Booker took part in the Skills Challenge in 2017. He also scored 25 points in the 2016 Rising Stars game and 17 points when he returned to that game for first- and second-year players the following season.

The NBA is changing the format to this season’s 3-point contest by adding a pair of deep shots that will be worth three points apiece. That change means each round will now be a total of 27 shots instead of 25, and competitors will now get 70 seconds to finish their shots instead of the customary 60.

The two additional shots will come from six feet beyond the 3-point line, between the racks located on the wings and the one at the top of the key.