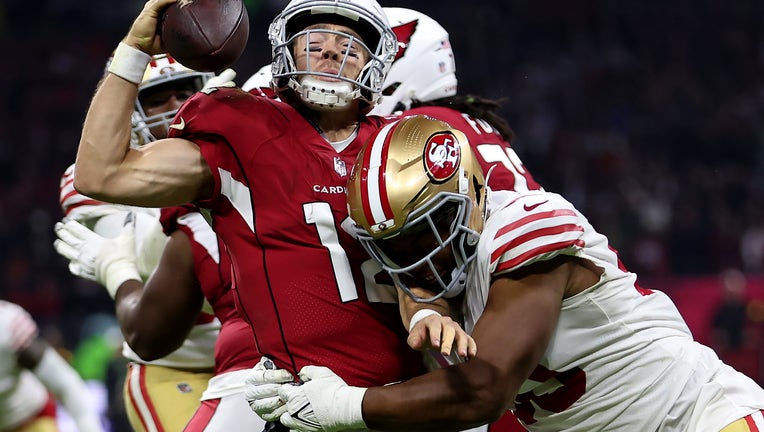 Kevin Givens #90 of the San Francisco 49ers sacks Colt McCoy #12 of the Arizona Cardinals during the second half of a game at Estadio Azteca on November 21, 2022 in Mexico City, Mexico. (Photo by Sean M. Haffey/Getty Images)

MEXICO CITY - The NFL's showcase game in Mexico City featured two teams going in opposite directions in a hurry. The Arizona Cardinals were on the wrong end of that exchange.

The San Francisco 49ers steamrolled the Cardinals 38-10 in Monday night's game at Estadio Azteca. The first half was fairly competitive — the 49ers had a 17-10 lead at the break — but the beat-up Cardinals simply couldn't hang with a Niners team that's quickly improving and looks like one of the better teams in the NFC.

It’s safe to say the Cardinals (4-7) are not improving and it would take a big winning streak for them to make the playoffs, even in a fairly mediocre NFC West.

There are many legitimate reasons for Arizona's problems, particularly on offense. The biggest one is injuries: starting quarterback Kyler Murray missed his second straight game with a sore hamstring, pushing backup Colt McCoy into action again.

It was another blow to the offense that's seen 10 of 11 starters miss significant time with injuries or suspensions.

But the defense was actually fairly healthy on Monday and was still completely outclassed by the 49ers.

San Francisco decided to train at altitude to get ready for the game at Estadio Azteca, which sits 7,200 feet above sea level. The Cardinals decided to stay home in Tempe, Arizona.

The Niners appeared to have the better approach, blowing past an exhausted Cardinals defense in the second half.

Still, the season rolls on. The Cardinals have six games left, and it'll be interesting to see if they have any fight remaining. Arizona hosts the Los Angeles Chargers (5-5) on Sunday.

"We've just got to put our best foot forward," McCoy said. "We know it’s a short week and figure out a way to get a win before the bye. That’s really our only focus and our only goal."

Not much. The Cardinals do have a few players who are fun to watch — safety Budda Baker and receiver DeAndre Hopkins. Both keep producing even when things seem hopeless. Baker led the Cardinals with 10 tackles while Hopkins caught nine passes for 91 yards.

Pretty much everything. The offensive line — which was missing four starters because of injuries against the 49ers — had trouble keeping McCoy upright. The running game wasn't very good with Murray out of the lineup. The defense ranged from OK early in the game to downright atrocious in the second half, missing multiple tackles on George Kittle's late 32-yard touchdown.

Backup WR Greg Dortch was thrust into a much bigger role when Rondale Moore got hurt on the first offensive series. He responded with one of the best games of his career, catching nine passes for 103 yards.

"Greg Dortch is a great football player," McCoy said. "I know Kyler trusts him. I know I trust him. He brings a lot of juice to our football team. And I thought he did a really nice job stepping up."

RB James Conner didn't have a great game, rushing for 42 yards on 14 carries. He also mishandled a potential pass reception, tipping the ball into the air and into the arms of San Francisco's Jimmie Ward.

McCoy was banged up in the game, and replaced by Trace McSorley in the fourth quarter, but said he should be OK. The big question is if Murray will return for the Chargers game or wait to return after the team's bye week.

97.4 — That's the average yards receiving over five games for Hopkins, who missed the first six games of the season after violating the NFL's policy on performance-enhancing drugs. If it holds, it would be the second-highest average of his career behind his 2018 season when he had 1,572 yards receiving.

The Cardinals host the Chargers on Sunday.

Jimmy Garoppolo threw four touchdown passes, including two each to Brandon Aiyuk and George Kittle, and the San Francisco 49ers won their third straight game by blowing past the Arizona Cardinals in Mexico City.