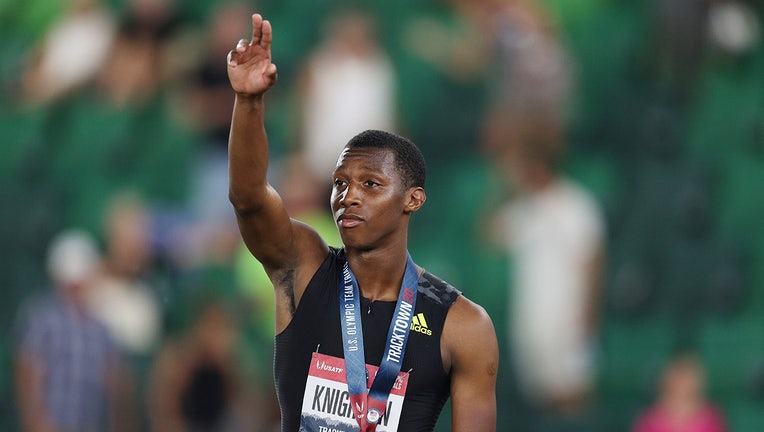 TAMPA, Fla. - A Tampa high schooler is heading to Tokyo after making history to become the youngest track-and-field athlete to join Team USA since 1964.

Erriyon Knighton, a 17-year-old at Hillsborough High School, came in third place overnight in the men’s 200-meter trials with a time of 19.84, earning a spot on the team ahead of the Tokyo Olympics. He finished behind Noah Lyles – who won in 19.74 seconds, the best time in the world this season – and Kenny Bednarek. The trio were the final Americans to earn spots in the Olympics across 28 sports.

Knighton is the youngest male track Olympian since Jim Ryun in 1964.

The race didn’t actually start until shortly after midnight. Temperatures at Hayward Field in Oregon reached 108 degrees and the surface of the track exceeded 150. It forced USA Track and Field to put a halt to the action Sunday afternoon.

With a time of 20.11 seconds in the 200-meter race, Hillsborough High sprinter Erriyon Knighton bested a U18 record previously set by Olympic gold medalist, Usain Bolt. Knighting didn't set out to break a record set by arguably the greatest sprinter of all time, but he knew he would do something special that day.

A few weeks ago, Knighton broke Usain Bolt’s 200-meter record for athletes under 18 – the fastest qualifier heading into the final.

At Hillsborough High School, this is just Knighton's third year in track. He initially got into the sport to help with his speed in football. However, along the way, it became more clear: Knighton was a track star in the making.

"During my sophomore year of high school, I was running times that college people are running in their senior year," Knighton recalled. "I was like 'I can do something bigger than just football.'