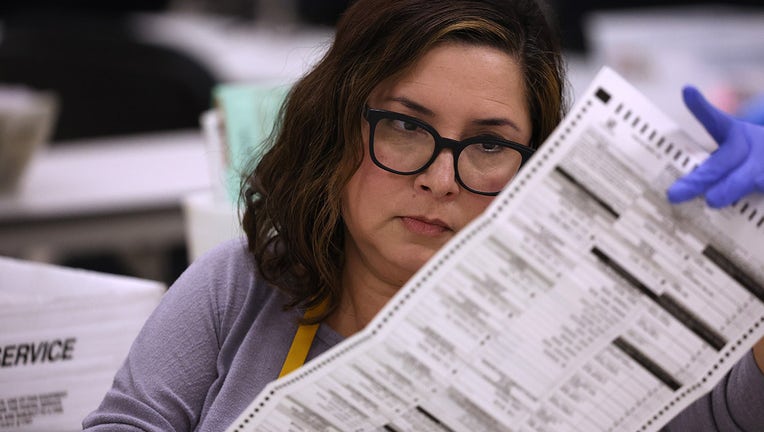 An elections worker inspects a mail-in ballot as she opens up and sorts mail-in ballots prior to tabulation at the Maricopa County Tabulation and Election Center on November 06, 2022 in Phoenix, Arizona. (Photo by Justin Sullivan/Getty Images)

The balance of power in Congress remains unclear Wednesday as several key Senate and House races are too close to call. While Republicans may yet gain control of the House, the fate of the Senate is even less certain after the Democrats' surprisingly strong showing in nearly every state not named Florida.

Vote counting continues in most states, but all eyes are on the key U.S. Senate races in Georgia, Arizona, Wisconsin, and Nevada. Here's where things stand in those states.

Georgia's race for Senate is the most certain of the uncertain races, in that it's headed for a runoff. Neither incumbent Democrat Sen. Raphael Warnock nor his Republican challenger Herschel Walker claimed an outright majority of the vote.

Georgia law requires a candidate to surpass 50% of the vote to win an election, so a runoff between the top two vote-getters will be held on Dec. 6.

What we're waiting for: A few precincts in Fulton and Grady counties did not report full numbers until midday Wednesday. Now, the runoff on December 6 could decide the balance of power for the entire Senate, depending on the outcome of the remaining races across the U.S.

Some of that early lead is from mail-in ballots returned ahead of Election Day, and Masters was expected to narrow that lead as ballots cast in-person are tabulated. Mail ballots returned on Tuesday or shortly before were not yet reported and will be counted in the coming days.

Kelly thanked his family and supporters gathered in Tucson and said he was confident he would prevail once all ballots are counted.

What we're waiting for: Maricopa County officials say more than 200,000 early ballots and probably up to 500,000 total ballots need to be tabulated over the coming days.

Laxalt and Cortez Masto have been locked in a tight race for weeks, both hitting hard on national party talking points: Laxalt blaming inflation and illegal immigration on Democratic policies, and Cortez Masto promising to block GOP-led attempts at a nationwide abortion ban and to fight for a pathway to permanent citizenship for undocumented immigrants who came to the country as children.

Hours after the polls closed, both candidates told supporters that they expected to come out ahead.

What we're waiting for: Nevada has a high percentage of paper mail-in ballots, which historically have taken days to tally.

After a long morning, the waiting is about over in Wisconsin. Republican U.S. Sen. Ron Johnson claimed victory Wednesday morning in the battleground state as he held a narrow lead over Democratic challenger Mandela Barnes.

"The votes are in. In all Democrat strongholds, municipalities are reporting 100% of wards are in and counted. There are some counties that have anywhere from 3-10% of the votes outstanding. These localities represent areas where we are winning by over 60%," Johnson said. "There is no path mathematically for Lt. Gov. Barnes to overcome his 27,374 vote deficit. This race is over."

The race was finally called by AP and FOX after 11 a.m. Wednesday – more than 15 hours after polls closed – and there had still been no comment from Barnes himself until later in the afternoon when he gave a concession speech.

What we're waiting for: Nothing, now that Barnes has conceded. The GOP adds one more seat to their count.

Information from the Associated Press and FOX News was used in this report.