The Falcon 9 rocket, carrying a COSMO-SkyMed Italian Earth-observation satellite, blasted off just after sunset following four straight days of delays due to weather and even a wayward cruise ship.

With no cruise liners in sight and last week’s wind and rain long gone, the cool but clear Florida skies provided perfect conditions – and a dramatic backdrop – for Monday’s launch.

The rocket’s 9 Merlin engines cut a bright trail through the cloudless twilight. As the rocket climbed back into the sunlight, its exhaust plume caught the rays of the setting sun and spread out across a wide swath of the sky. 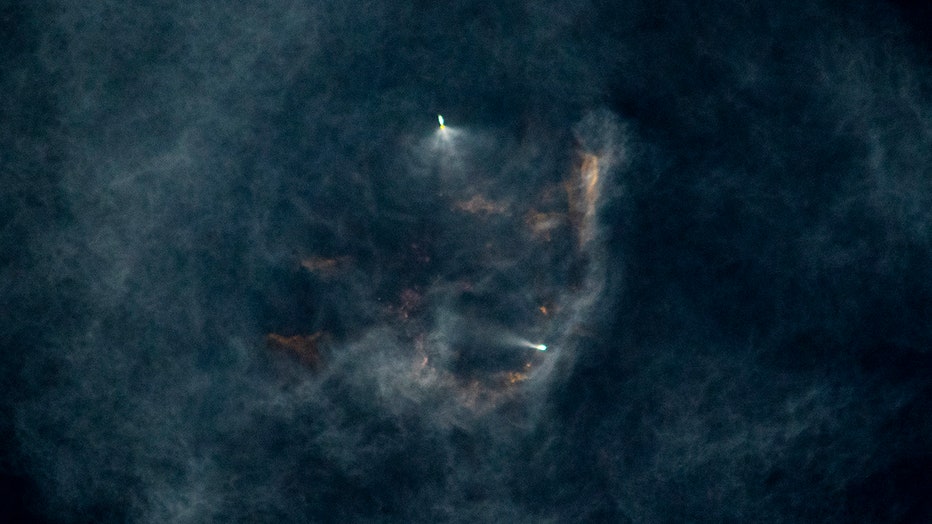 Exhaust plumes from the first and second stages created a glowing nebula-like display in the sky.

Two and a half minutes after launch, the first stage booster separated for its return to land. As each stage’s thrusters fired – one towards orbit and the other toward land – the white plumes continued to gleam in the setting sun, pulsing and streaming in a display that looked almost like a distant starry nebula.

With the otherworldly cloud still hanging in the sky, a triple sonic boom cracked across the coast as the Falcon 9 first stage returned to Landing Zone 1 at Cape Canaveral Space Force Base, safely settling down atop a glowing flame.

SpaceX cuts launch costs by reusing rocket boosters. This particular booster had previously flown twice as a side booster as part of the triple-core Falcon Heavy, but this was the first time a side booster was reflown in a primary role.

Sunday’s attempt was scrubbed just 33 seconds before liftoff when the Royal Caribbean Harmony of the Seas entered the rocket’s hazard area, set by the U.S. Space Force. The Coast Guard says it has opened an investigation into the violation.

"Our primary concern is the safety of mariners at sea and we will continue to work with our federal, state and local port partners to ensure safe and navigable waterways," a USCG statement noted.

Two views from the press site showing the sunset launch and booster landing.

With Monday’s successful launch, SpaceX’s attention turns to their West Coast launch pad, where a classified satellite for the National Reconnaissance Office is due to launch Wednesday. Meanwhile, another batch of the company's Starlink satellites is expected to blast off from Kennedy Space Center, likely before the end of the week.

SpaceX has said they plan up to 52 launches this year, including several crewed missions.