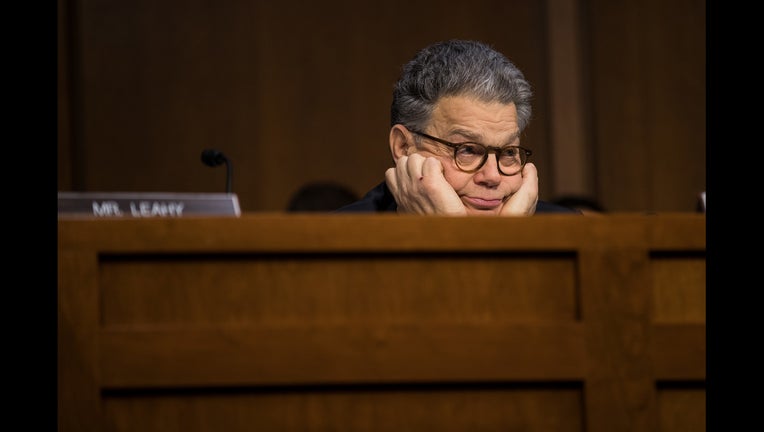 (KMSP) - Minnesota Sen. Al Franken is responding to another sexual misconduct allegation made against him after a woman told POLITICO he tried to forcibly kiss her following a taping of his radio show in 2006.

A former Democratic congressional aide, who was not identified by POLITICO, said Franken pursued her after her boss left the studio. When she tried to avoid him, she claims he told her: "It's my right as an entertainer."

Franken, who has been accused of sexual misconduct by several other women, denied the latest accusation.

"This allegation is categorically not true and the idea that I would claim this as my right as an entertainer is preposterous," Franken said in a statement. "I look forward to fully cooperating with the ongoing ethics committee investigation."

A second woman, a writer named Tina Dupuy, published an article with The Atlantic Wednesday afternoon claiming Franken groped her while they were taking a photo together during a Media Matters party in 2009.

"We posed for the shot. He immediately put his hand on my waist, grabbing a handful of flesh. I froze. Then he squeezed. At least twice," she wrote.

Franken has not yet responded to the accusation.

Radio host Leeann Tweeden was the first woman to come forward, accusing Franken of kissing and groping her while on a USO tour in 2006. She also released a photo of Franken grinning and reaching for her chest, as if to grope her, while she slept on a military aircraft during the tour.

Four other women have also accused Franken of unwanted touching.

Stephanie Kremplin, a U.S. Army veteran, told CNN Franken cupped her breast during a photo opportunity when he was visiting American troops in the Middle East with the USO in December 2003.

Lindsay Menz of Frisco, Texas also told CNN Franken grabbed her buttocks while they were taking a photo together at the Minnesota State Fair in 2010.

Two more women, whose identities were not revealed, told the Huffington Post that Franken grabbed their buttocks during separate incidents at campaign events in 2007 and 2008.