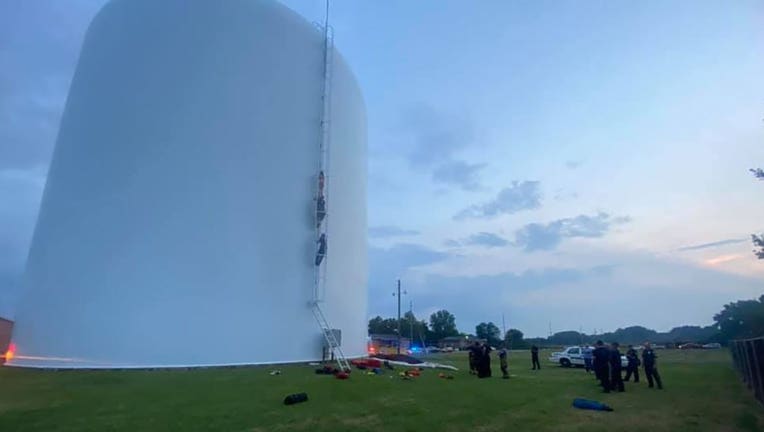 ATHENS, Ala. - Firefighters rescued a woman last week who was found swimming in a 70-foot high water tank in Alabama.

The unidentified woman broke a fence barrier in Athens and climbed a ladder to the top of the tank, which was filled with roughly 350,000 gallons of water, authorities said. The hatch of the tank was apparently not secure and it closed behind her after she went inside, according to a Facebook post by the city.

The woman was spotted last Thursday by Doug Duran, a retired Athens police officer who lives across the street from the tank.

Athens firefighters Hunter Campbell and Coty Collins climbed the tank and found the woman swimming inside, according to the post. They managed to persuade her to leave the tank and used a harness to bring her down safely.

The woman was set to undergo a mental health evaluation, according to Athens Police Chief Floyd Johnson.

"We appreciate the neighbors and Mr. Duran who contacted authorities because we could have had a very different outcome," Johnson said, according to AL.com.

Jimmy Junkin, the manager of the city’s water/wastewater department, said workers drained and sanitized the tank after the incident, reports said. Debris was also removed.

Junkin noted that it appears the hatch was not secure after a contractor re-painted the tank last week.

The city has clean water in its other tanks, so Junkin didn't expect any disruption in service, he added.

Police, firefighters, and personnel from the Athens Water Department responded to the scene.

Athens is about 25 miles northwest of Huntsville.