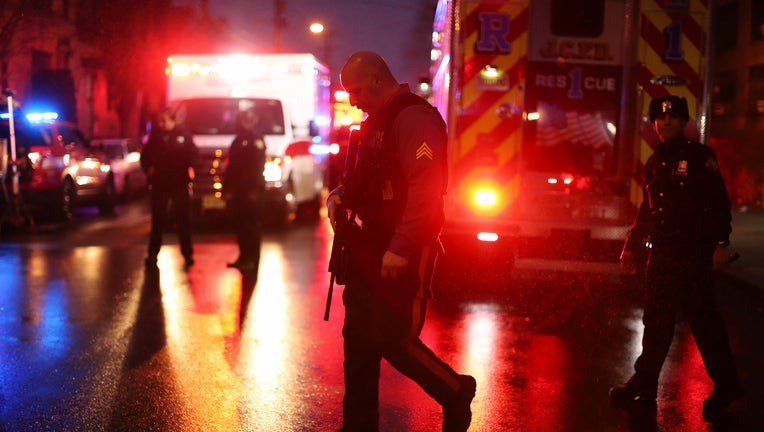 Emergency personnel are shown on the scene of a shooting that left multiple people dead on December 10, 2019 in Jersey City, New Jersey. In a raging gun battle that by some accounts lasted in excess of an hour, six people - a Jersey City police offic

JERSEY CITY, N.J. - Officials in New Jersey are warning the public about a number of fake GoFundMe pages claiming to benefit a detective who was shot and killed in the line of duty Tuesday.

“Warning - We have been alerted that there are numerous GoFundMe pages set up for Det. Joseph Seals most, if not all, are fake,” they wrote in a tweet.

They asked the public not do donate to any GoFundMe for Det. Seals, and said they would be coordinating an official fundraising effort.

Det. Seals was one of six people who lost their life after authorities say two gunmen opened fire at a Kosher Market in Jersey City Tuesday afternoon.

Three bystanders and the two suspects were also killed in the incident.

Seals, 40, was credited by his superiors with having led the department in the number of illegal guns removed from the streets in recent years, and might have been trying to stop an incident involving such weapons when he was cut down by gunfire that erupted near a cemetery, authorities said.

Jersey City Police Chief Michael Kelly said the officer was trying to stop some “bad guys" near the cemetery. The gunmen then drove a stolen rental van to another part of the city and engaged police in a lengthy shootout from inside the kosher market, where five more bodies were found.

“It's a really tough day for the city of Jersey City,” Fulop said Tuesday. Seals “was one of the best officers for getting the most guns off the streets. He was a good cop.”

Jersey City Mayor Steven Fulop said in a tweet that a review of security cameras show the gunmen targeted the market. He said two officers one block away immediately responded and engaged with the gunmen. But Fulop did not elaborate further, and his public safety director had said Tuesday that terrorism wasn't suspected.