BARCELONA, Spain - The Gran Teatre del Liceu opera house in Barcelona reopened this week and hosted its first concert since the coronavirus lockdown to a room filled entirely with plants.

The UceLi Quartet played Giacomo Puccini’s I Crisantemi (Chrysanthemums) to 2,292 plants — one for each seat in the auditorium. The concert was also livestreamed for humans.

The event was the work of Spanish conceptual artist Eugenio Ampudia, who said he was inspired by nature during the pandemic. 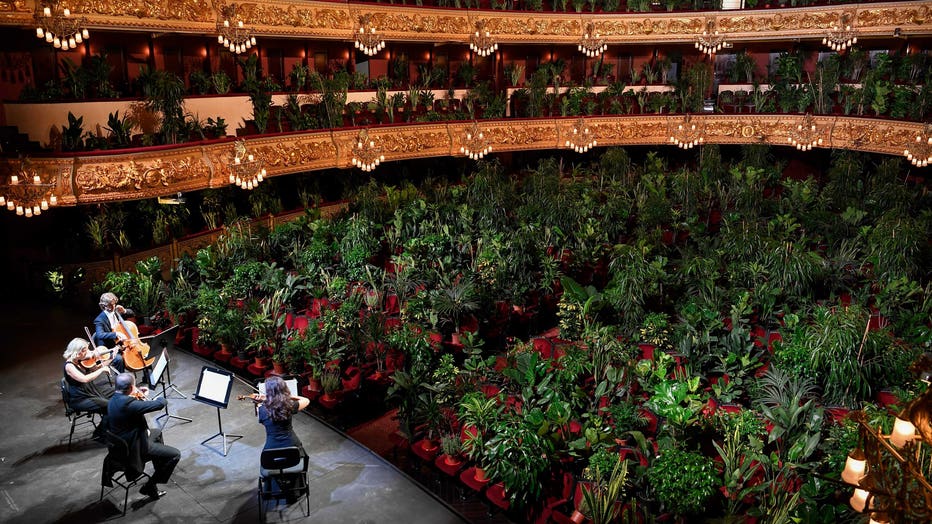 The Uceli Quartet perform for an audience made of plants during a concert marking the reopening of the Liceu Grand Theatre in Barcelona on June 22, 2020 following a national lockdown to stop the spread of the novel coronavirus. (Photo by LLUIS GENE/A

“I heard many more birds singing. And the plants in my garden and outside growing faster. And, without a doubt, I thought that maybe I could now relate in a much more intimate way with people and nature,” he said before the performance.

At the end of the eight-minute concert, the sound of leaves and branches blowing in the wind resonated throughout the opera house like applause.

The plants came from local nurseries and will be given to health care workers in Barcelona as a thank you for their efforts during the pandemic, according to the theater.

Spain was the second European country after Italy to be forcefully hit by COVID-19. More than 247,000 people have contracted the virus and 28,300 have died, according to data compiled June 24 by Johns Hopkins University.

The country implemented one of the world’s strictest lockdowns in mid-March, which included a home confinement rule for children under 14 years old that lasted for 44 days. Adults could only leave home for essential shopping or to make unavoidable commutes to work.

In an effort to restart its economy, the country has been lifting restrictions in a phased fashion. Barcelona and Madrid, the cities with the highest COVID-19 death tolls, remained under tighter restrictions for longer than other parts of the country.

On June 21, Spain finally lifted its national state of emergency — allowing citizens to travel freely throughout the country for the first time since the lockdown was imposed on March 14.