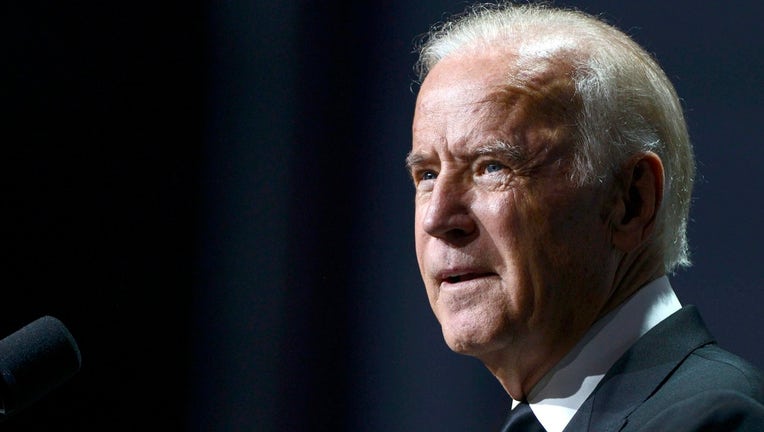 WASHINGTON (AP) - In his first public appearance since several women said he had behaved physically inappropriately, former Vice President Joe Biden quipped about his tendency to be affectionate.

After he embraced Lonnie Stephenson, the male president of the International Brotherhood of Electrical Workers, Biden told his audience: "I just want you to know, I had permission to hug Lonnie."

The quip on Friday was met with cheers from the largely male audience that represented the sort of blue-collar white workers Biden's supporters hope he can win back from President Donald Trump. Biden focused his speech on the need to respect manual labor and told the union leaders their work is what allows high-paid Wall Street traders and others to function.

"All you're looking for is to be treated fairly, with respect, with some dignity," Biden said. "Because you matter."

Biden's publicly affectionate persona, however, has gotten him in trouble as he gears up for a presidential run. Last month, Nevada politician Lucy Flores, said she was uncomfortable when Biden kissed her on the back of the head backstage at a 2014 campaign event. Her account was countered by scores of women - from prominent lawmakers to former Biden staffers - who praised him as a warm, affectionate person and a supportive boss. But several other women have also come forward to recount their own awkward interactions with Biden.

The 76-year-old said in a cellphone video released Wednesday that he understood "social norms have begun to change" and "the boundaries of protecting personal space have been reset."

Biden allies insist the eruption has done little to slow down planning for a 2020 campaign. Barring the unforeseen, he is expected to announce his candidacy, perhaps online, after Easter and immediately embark on a trip to early voting caucus and primary states. Those stops would be followed by a ceremonial kickoff.

Advisers say they are working to build out a robust campaign staff, including operatives in Iowa and South Carolina, states that are seen as key to his path to the nomination. Women are being considered for key roles, including senior strategist and deputy campaign manager, according to advisers, who insisted on anonymity because they were not authorized to discuss the planning publicly.

Biden's sister, Valerie Biden Owens, has long been one of his most trusted political confidantes. His daughter, 37-year-old Ashley Biden, who has largely kept a low profile during his political career, may also take on a more prominent role. She has quit her job as a social worker, fueling speculation.

But the past few weeks have laid bare the challenges Biden would face. Some women's groups have balked at his attempts to apologize for his role overseeing the Senate hearings in which Anita Hill accused Supreme Court nominee Clarence Thomas of sexual harassment.

President Donald Trump has joined the criticism, despite his own history with more than a dozen women accusing him of improper sexual acts. Trump has denied those allegations, and on Thursday he posted a doctored version of Biden's video. In Trump's version, a Biden avatar approaches Biden from behind and appears to grab his shoulders.

"Yeah, I think I'm a very good messenger and people got a kick out of it," Trump told reporters Friday.

Reacting in a glimpse of what may lie ahead in the 2020 campaign, Biden tweeted back at Trump, "I see that you are on the job and presidential, as always."

Biden has also been criticized this spring following reports that he was considering asking 2018 Georgia gubernatorial candidate Stacey Abrams, a 45-year-old African American woman, to be his running mate during the Democratic primaries. Abrams herself brushed back the speculation by saying she thought a woman or a minority would be the Democratic Party nominee in 2020.

Speaking to MSNBC on Thursday, Abrams offered support for Biden and said Democrats shouldn't "have perfection as a litmus test." But in a sign of the volatility that could be ahead for the Democratic field, Abrams said she doesn't expect to decide whether to launch a presidential bid of her own until the fall, just months before primary voting begins.

The rush of attention on Biden's behavior with women has raised questions about whether his hugs and shoulder squeezes are simply out of a different era or a new front in the MeToo movement that has put a spotlight on the actions of powerful men.

"It feels so much like some of the other MeToo stuff that's been floating around, that I'm afraid he might get tarred with that brush whether or not it's really warranted," said Mike Waggoner, a 70-year-old Democrat from Waterloo, Iowa. "This is such a sensitive area and an important area, I'm afraid it could just take him out."

As the scrutiny has intensified, Biden has kept the counsel of a small group of advisers who have been with him for years. The team appeared to respond slowly to Flores' assertions, first releasing a brief statement from a spokesman, then a longer statement from Biden himself about 36 hours later. Four more days passed before the former vice president's video response was released.

"It is a really difficult period before you announce when you are nonetheless a target," said David Axelrod, a longtime political adviser to President Barack Obama. "You're not wholly in a position to respond and yet you have to, and so that may account for the halting way in which this unfolded."